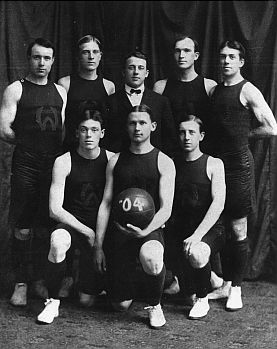 As Wheaton College begins its 2008-2009 basketball season the history of Wheaton’s basketball program should be remembered. The first time basketball appeared in the Olympics was 1904, held in Saint Louis, Missouri and was held as a demonstration sport and not for any medals. Four different levels of competition were held with Wheaton College participating in the College-level along with Hiram College and Latter Day Saints University (which no longer exists).

Of Wheaton’s intercollegiate sports, basketball has the longest consecutive record with competition occurring since 1901. The game had been invented only nine years earlier by Dr. James Naismith, an instructor in the YMCA College in Springfield, Massachusetts. Wheaton’s strong connection with the YMCA helped foster the adoption of this sport at the college. In 1899 the first Wheaton College gymnasium was built with a playing floor of 77 ft. by 36 ft. compared to the contemporary 94 ft. by 50 ft.

It was one of the finest gymnasiums in existence in the state at the time. Additionally, because of the quality of the facilities and its proximity to Chicago Wheaton became one of the first colleges to have varsity teams.

In 1904 Wheaton was invited to participate in the national college basketball tournament at the World’s Fair and Olympics in St. Louis, achieved by compiling the best winning percentage of any college in Illinois. The Olympics were originally to be held in Chicago but were combined with the Louisiana Purchase Exposition after extensive political wrangling.