Today, December 14th, over one-hundred and fifty years ago the first classes were held in the basement of a yet-complete building atop a hill in section 16, township 39. Milton Township in Dupage County, like many other townships in the burgeoning Midwest, took advantage of legislation that enabled townships to use land in section 16 for schools.

The Wesleyan Methodist Church was begun in 1843 as response to ambivalence over slavery by the Methodist Episcopal Church. Founders of this church were Orange Scott, Lucius Matlack, Luther Lee and LaRoy Sunderland. In the late 1840s the Illinois Annual Conference of the Wesleyan Methodists sought to establish a school where they could educate their children and advance their reform beliefs, especially against slavery. Since Wheaton offered favorable terms, according to Rufus Blanchard, it was chosen as the seat of this school. He further notes, “Preparations for building began by the founders kneeling in the prairie grass on the summit of the beautiful hill…and dedicated the hill and all that should be upon it to that God in whom trusting they had boldly gone into the thickest of the fight, not only for the freedom of human bodies, but of human souls as well.” 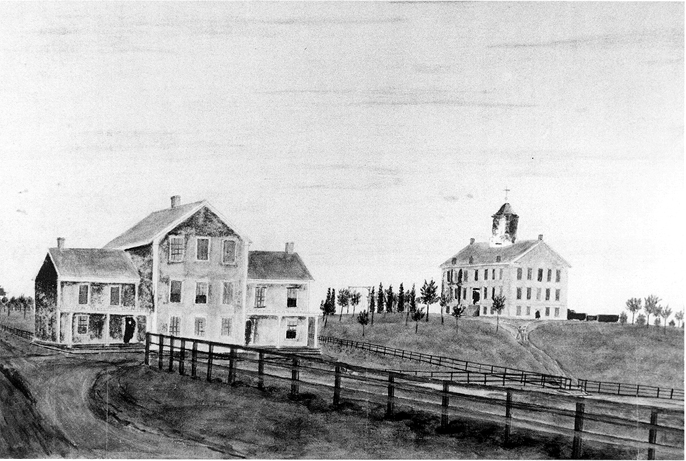 Eventually, the stone building, built with limestone excavated from a quarry in nearby Batavia and hauled to the site from the train station by Gaius Howard, measured forty-five feet by seventy-five and consisted of two stories above the basement. The cost of the structure was about $10,000. During the first year the student body numbered 140 students and the second year the number rose to 270.

The first instructor and President was Rev. John Cross. Little is written about Cross, but much could be noted. His work in establishing the Underground Railroad in the Midwest is cited in short entries in dozens of works. His fuller story awaits a proper telling. The following year, after Cross left to help begin Amity College in Iowa, Rev. C. F. Winship took the helm for a year, after which he became a missionary to West Africa. Rev. George P. Kimball, fresh from Amity serving with Cross, taught alongside Miss Pierce and Rufus Blanchard until1855 when, as Rufus Blanchard relates in his county history, Rev. J A. Martling became “Principal of the first collegiate year,” as the Illinois Institute had bee chartered by the State of Illinois as a college in 1855. Professor Freeborn Garretson Baker filled in, as well, until September 1856 when Rev. Lucius C. Matlack, who had been chosen president some years before, took on his role as president.

During the early years of the Illinois Institute the school rested on a solid financial foundation having designed to secure a permanent endowment fund of $100,000, by the sale of scholarships. However, like many schools of the time, particularly Wesleyan schools, thousands of dollars in pledges went unpaid for scholarships that had been redeemed. The Illinois Institute began receiving transfer students from other Wesleyan schools, like the Leoni School in Michigan, that were struggling financially. Shortly after Matlack became president the United States underwent a significant financial crisis, which later prompted a national revival. Matlack did all he could to raise funds but was unsuccessful and the trustees pressured him to resign as the school consumed its endowment and was thousands of dollars in debt. Not wanting to leave the school adrift Matlack suggested bringing in Jonathan Blanchard who was known as a strong leader and fundraiser–having brought Knox College from the financial brink to solvency. Matlack resigned in 1859 noting: “I have no salary, no revenue, and am in debt.”

The trustees agreed with Matlack’s idea and approached Blanchard to lead the school forward if he would continue the school’s anti-slavery, temperance, and oath-bound societies beliefs. Blanchard agreed and stipulated that the charter should be changed so that the trustee board be self-governing and composed as Blanchard saw fit. The transition was smooth and the board expanded. The Wheaton College minutes declared “The college hereafter is to be under the control of Orthodox Congregationalists with the cooperation of its founders and our friends, the Wesleyans.”

In January, 1860, President Blanchard entered upon the duties of his office. The name of the institution was changed to Wheaton College, and the charter was amended by the Legislature of 1861. The first class of seven young men, all of them from the regular college course, graduated on the 4th of July, 1860. Wheaton would reconnect with the Wesleyans decades later when the Wesleyan Theological Seminary opened in 1881. It closed in 1889 after financial and personnel difficulties.