In 1865 the 117th Illinois Infantry Regiment fought in the final battle for Mobile. During the campaign, young William T. Osborne (born in slavery near Monroeville, Alabama, the setting for To Kill a Mockingbird) attached himself to the soldiers, who turned him over to Colonel Jonathan Merriam. Later, William took charge of Merriam’s horse, Frank. Part of the larger Mobile Campaign, this encounter was the one of the last official battles of the Civil War. As the battle commenced, a Union force with 16,000-strong marched against a much smaller Confederate army composed of just 4,000 soldiers. The battle lasted only a few hours, and the Union army won by sheer size alone. When all was said and done, only 200 Confederate soldiers escaped; nearly 3,400 were taken as prisoners of war to Ship Island and another 250 lost.

William Tate Osborne was born in Alabama, according his death certificate, on February 12, 1855*.

In the summer of 1865, Merriam brought Osborne to his home in Atlanta, Illinois. Merriam and his wife, Lucy, provided for him until he enrolled in the college preparatory course at Wheaton in 1869. Encountering racism and barriers to William’s education, W.F. Wright of Atlanta, IL inquired on behalf of Col. Merriam of Jonathan Blanchard as to the possibility of Wheaton College admitting Osborne for studies. Wright describes Osborne’s character as “unblemished,” and his desire for an education “intense.” 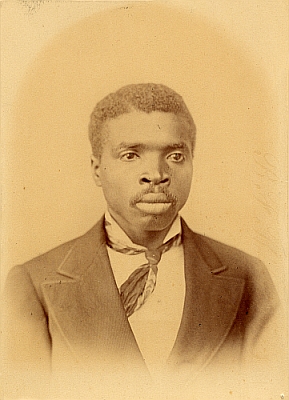 While at Wheaton, Osborne resided in local homes and in Blanchard Hall for his final year. Osborne became the first Black president of the Beltonian Society and was remembered for his good oration skills and singing voice. He received his Bachelor of Arts degree in 1876. William Osborne was a member of College Church from 1869-1878.

Upon leaving Wheaton College, Osborne moved to Quincy, Illinois. In 1878 he crossed the Mississippi River and lived in Monroe City, Missouri, the same year marrying Miss Parthena Buckner. In 1885 he lived in Shelbina, Missouri. Mr. Osborne became Reverend Osborne in 1886 when he was ordained as a minister in the African Methodist Episcopal Church. Along with these residences Osborne lived and pastored churches in Seattle, Washington, Helena, Montana, Louisiana, Missouri, and Omaha, Nebraska. During his 1912-1917 Omaha pastorate, Osborne would be married to Earline (also known as Pinky). It is not known if he remarried or was widowed. The 1920 Kansas City census informs us that he rented his home, lived in a black neighborhood, and he and both his parents were born in Alabama. He pastored the Ebeneezer African Methodist Episcopal Church and became bishop of the denomination. Osborne died January 15, 1932 of chronic nephritis at his home (2811 Vine, Kansas City, MO).

In 1987 students formed The William Osborne Society and exists to promote self-identity and self-awareness among Black American students.