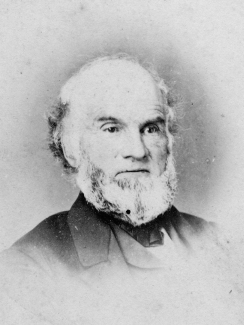 When Jonathan Blanchard arrived in Wheaton in December 1859, he came alone. Mary, his wife, and family remained in Galesburg until the circumstances in Wheaton became more certain. Though the financial footing of the Illinois Institute was rather shaky, Jonathan Blanchard’s vision of what could be (and what actually was) was much more firm.

On December 5, 1859, Jonathan wrote to Warren Wheaton. Wheaton had served as secretary for the Institute board of trustees and was also a major benefactor to the struggling school. Blanchard negotiated with Wheaton for a further donation of land and made Wheaton a proposal:

Now I propose this:

1. Call the College “Wheaton College” and that will at least save your heirs the expense of a good monument;

2. Make your donation of each alternate lot of that land an outright donation to the College.

The College is already a fact and can no more be a failure than your farm can. It may yield more or less in any one year but it will be there.

Jonathan Blanchard had an unwavering confidence in the purpose and goals of a college established For Christ and His Kingdom.