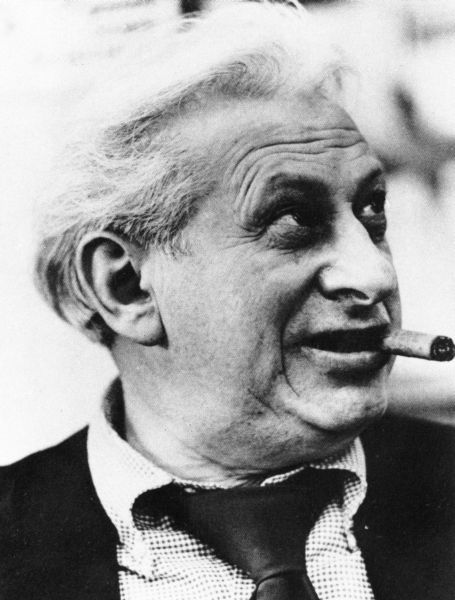 Twenty years ago, the Wheaton Alumni magazine began a series of articles, titled “On My Mind”, in which Wheaton faculty told about their thinking, their research, or their favorite books and people. Franklin S. Dyrness Professor Emeritus of Biblical Studies C. Hassell Bullock (who worked at Wheaton from 1973-2009) was featured in the Spring 2001 issue.

I have sometimes pondered the question, “Is it possible for a society to commit the sin against the Holy Spirit?” Obviously, Jesus, in Matthew 12, spoke about individuals who had turned the moral code upside down–good was evil, and evil was good. Isaiah too described that state of moral depravity:”Woe to those who call evil good and good evil” (Isa. 5:20).This is what the sin against the Holy Spirit means. John Milton summed it up well in Satan’s apostrophe,”Evil be thou my Good.”

Yet I don’t think believers can commit this sin.They belong to God, and Jesus assured us, “I give them eternal life, and they shall never perish, and no one shall snatch them out of my hand” (John 10:28).Then why should believers be concerned about this warning at all? Perhaps the answer is that we can become accomplices in the process of moral decline.We can, by our own indifference to the issue of right and wrong, abet our society in its trek toward moral inversion. In the debate over our current attorney general’s confirmation, one opposing senator referred to abortion and homosexual rights and called them “fundamental values.” “Rights” have become “values.”The moral battle is being waged in the church too. Despite the mounds of exegesis that favor moral clarity, the claim is that we should be neutral on certain moral issues. If Satan can first get us to become neutral or indifferent on morality, then he has made us accomplices in progress toward the reversal of moral standards.

Jesus warned the religious leaders of His day that, if they continued to see the work of God and persisted on calling it evil, their hearts would fossilize in that state of thinking.They would see evil and think it good, and good, and think it evil.Their moral code would turn upside down, and they would become incapable of repentance and thus of forgiveness.

The final goal of our moral journey is not neutrality about right and wrong. Even when we insist that one has the right to determine one’s own moral standards, we become a catalyst in the movement toward moral inversion.Then there are no standards of the whole, no absolutes by which our actions and attitudes can be reckoned right or wrong. Everyone has become a law to oneself.This is happening with homosexuality, and there are signs that some are determined to put pedophilia in the same category.

As Christians, in our attitude toward sin we are either accomplices or members of the opposition.There is no neutrality. Some of us need not only to repent of the sins we have committed, but we need to repent of our neutrality to sin.We need God to renew in us a sense of righteous indignation as well as compassion about the sinful world we live in. C. S. Lewis said that an absence of righteous indignation might be one of the alarming symptoms of a society that is losing its moral moorings. Can a society commit the sin against the Holy Spirit? Broadly speaking, I believe it can.That’s what happened to Canaanite society whose sexual perversion rendered it irredeemable. God help us not to be an accomplice in the progress of our cultural journey toward moral inversion, where good is evil and evil is good.

Kenneth Landon graduated from Wheaton in 1924, just ahead of his wife-to-be Margaret (Class of ’25). Newly married and full of hope, they set out in 1927 for a lifetime of ministry in Southeast Asia with the Presbyterian Mission. For most of their decade of service in Siam, they were stationed at Trang, 500 miles south of Bangkok.

The Landons had considered their call into mission to be life-long. How then did it come about that just ten years into their work in Thailand, they came home on furlough never to return as missionaries? As you might imagine, multiple and complex issues were involved. The fact that their resignation letter, dated October 9, 1940, runs twenty one typed, double-spaced pages attests to that.

The letter, written after three years away from Thailand and a year after they formally severed ties with the Mission, details their reasons for leaving. There had been serious conflict between the Landons and the leadership of the Presbyterian Mission in Thailand. Yet the Landons alleged that the problems pre-dated their arrival in Thailand. On page two of the letter, we read: “The inharmoniousness of the Mission was clearly evident when we joined it in 1927.”

The lightning rod for their criticisms was the Mission’s Executive Secretary, the Rev. Paul Eakin. Writing in 1940, the Landons decried the fact that “strifes, jealousies, and antagonisms are worse now than they were thirteen years ago.” The Landons’ enumeration of Eakin’s alleged misdeeds runs the entire length of the letter. Chief among their concerns were a “policy of secrecy”–poor communication within the Mission, together with personal animosity and slander on the part of Eakin toward themselves.

But there were wider issues as well. The Landons did not agree with the overall emphasis of the Mission at that time. It was a period of growing institutionalism; evangelistic efforts were being curtailed in favor of educational and medical work. The Landons charge in the letter that “Mr. Eakin has openly opposed the work of evangelistic missionaries like…ourselves.”

Kenneth, looking back at the situation decades later, asserted (in The Landon Chronicles) that the Mission had been “absolutely backward and without vision,” and that the Mission people were “not raising up a national church, as they should, and were failing to do the obvious things to create an indigenous, Thai church.” It is interesting to compare the substance of the carefully-worded 1940 letter with Kenneth’s less-guarded comments forty years later. In the latter account there is no mention of Eakin; he speaks only against “the Mission.” Perhaps time had faded or healed the memories and it was no longer personal; the passage of forty years certainly had given him a broader perspective.

The Landons’ exit from Siam in 1937 is a case study in missionary attrition. The cause of Christ in Thailand lost two sharp and passionate minds–at least as far as their presence on the ground as missionaries. No doubt they continued to engage in the spiritual battle, helping the fledgling Thai church through their prayers in the ensuing decades. They also maintained a number of relationships with Thai friends–Christians and non-Christians alike. Both Kenneth and Margaret distinguished themselves in other pursuits following their resignation from the Presbyterian Mission. Kenneth worked for the government as a specialist in Southeast Asian affairs. Margaret became a notable author, best known for her work Anna and the King of Siam, upon which the Broadway hit The King and I is based. Yet, what might their talents and drive have contributed to the mission to reach the Thai people in the 1940’s and beyond?

The Landons’ resignation letter is part of a larger body of material that had been restricted until 2010.

Since its origin in 1855-60, the word “prexy,” representing a shortened term for “president,” was invoked for decades by students on American college campuses as a term of endearment for their administrative leader. At Wheaton College the term was applied to presidents Charles Blanchard, J. Oliver Buswell and, most familiarly, V. Raymond Edman. While visiting campus for reunions, generations of older Wheaton College alumni happily swap stories, often casually referring to the piety and dedication of their beloved prexy, not needing to explain his identity. Interestingly, “prexy” is not applied to subsequent presidents Hudson Armerding, Richard Chase, Duane Litfin or Philip Ryken, perhaps because it has simply fallen out of style.

For over 200 years, from 1768 to the present, the Encyclopedia Britannica has published “the sum of knowledge,” collecting articles on a vast array of subjects written by experts. For decades the multi-volume set has graced the shelves of homes, schools and libraries the world over. In 2012 the company announced that the 2010 edition would be the final printed set. From now on Encyclopedia Britannica will be published exclusively online. Throughout the decades Britannica has engaged the talents of many capable contributors to write entries. One such was Dr. S. Richey Kamm, professor of history and political science at Wheaton College. In 1958 Kamm was asked by John V. Dodge, Managing Editor of the Encyclopedia Britannica, to revise an article about Lincoln, Illinois. 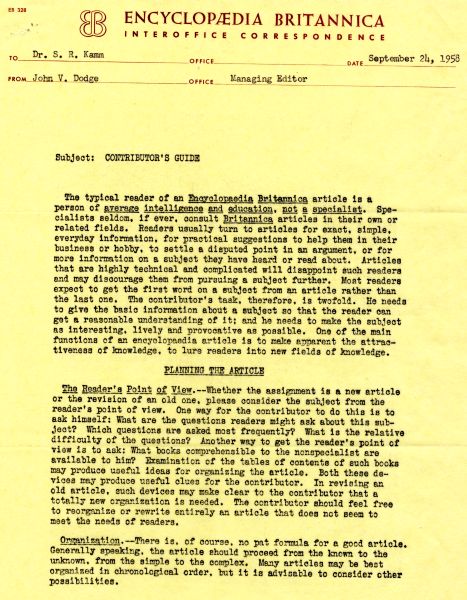 Dodge instructed Kamm to not exceed 150 words and emphasize Abraham Lincoln’s role concerning the the city. The article was to completely replace the previous version, “to be written from a fresh point of view.” Dodge included a four-page, single-spaced Contributor’s Guide. “The typical reader of an Encyclopedia Britannica article is a person of average intelligence and education,” states the Guide, “not a specialist. Specialists seldom, if ever, consult Britannica articles in their own or related fields.” The Guide covers such matters as organization, length, quotations, copyright, bibliography, illustrations, captions and photographs. “There is, of course, no pat formula for a good article,” the Guide goes on. “Generally speaking, the article should proceed from the known to the unknown, from the simple to the complex. Many articles may be best organized in chronological order, but it is advisable to consider other possibilities.” Kamm continued revising this entry for several more editions.