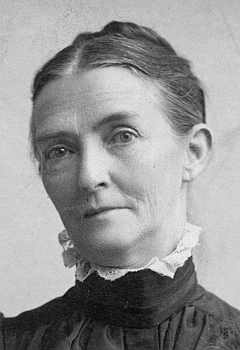 Born September 19, 1841 in a log cabin in Homer Township near the present Lockport, in Will County, Illinois, Adeline Eliza Collins was the only child of Fredrick and Nancy Mason White Collins. Addie attended Oberlin College in 1858 but transferred to Wheaton because it was nearer home and when she learned that it was open and that women might study there. From materials in the Archives and alumni records it has been established that Addle Collins was Wheaton’s first woman graduate in 1862. Known as “Addie” to her friends and associates she was later to become Principal of the Ladies’ Collegiate Course. When Addie left the principalship in 1865 the young women of the college gave her a set of Browning poems and a letter of appreciation was signed by O.F. Lumry, secretary of the faculty and president, Jonathan Blanchard. Two years later Addie married Henry D. Hatch and lived on a farm near her childhood home. They gave a portion of their land for the building of a Congregational church in which Addie later played the organ and taught a Sunday school class. Henry and Addie had one daughter, Emily Ellen, two grandchildren and two great-grandsons.