In his memoirs The Wheaton I Remember, Edward “Coach” Coray (Professor Emeritus and former Executive Director of the Alumni Association) recalls his first days as an undergraduate student at Wheaton College in the Fall of 1919. 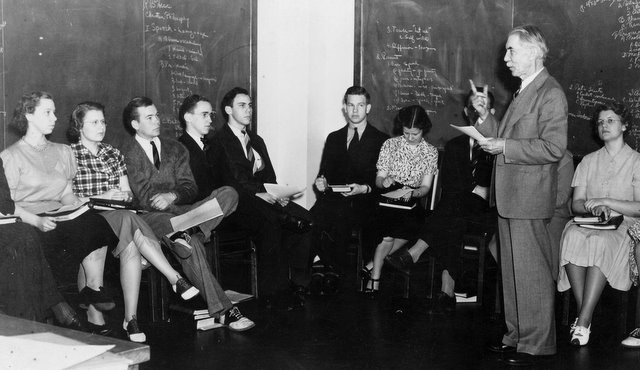 Our first class was rhetoric and we sat in chairs around the sides of the room. Professor Straw took roll peering at each student over the top of his glasses. Then he read Scripture and offered prayer. Next he startled a member of the class by calling on her to sing a hymn. In the days which followed members of the class read Scripture and offered prayer and each took his turn at singing. From an aesthetic standpoint the music was not always top quality.

The first day’s devotions having ended, our teacher instructed us each to take a section of the blackboard and summarize the first chapter of the text. My friends and I kept our seats. Professor ambled over, faced us, looked us over and said, “What’s the matter with you boys?” We explained to him that we had tried to buy textbooks but the supply had run out, that we did have a real thirst for knowledge and that the situation was one which caused us much sorrow. Rather than bring tears to his eyes Prof gave us a cold look and said, “Shame on college men who are not more resourceful than that. You should have borrowed a book or used the one in the library. Zeroes for each of you.” Whereupon he took his gradebook, made sure of our names and started each of our college careers with a big fat zero.