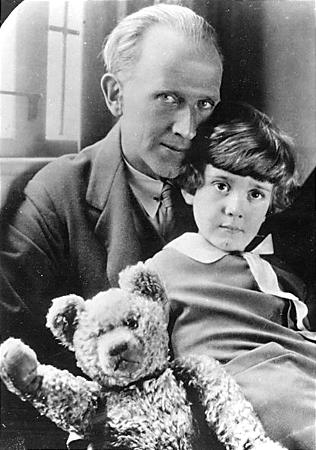 Alan Alexander Milne was born in Kilburn, London, England in 1882 and grew up at Henley House School, a small independent school in London run by his father. One of his teachers was H.G. Wells who taught there in 1889-90. Milne later attended Westminster School and Trinity College, Cambridge, studying mathematics. While at Cambridge Milne edited and wrote for a student magazine, Granta, where he came to the attention of editors at Punch, a humor and satirical magazine. He would later work at Punch as an assistant editor. In 1913 Milne married Dorothy “Daphne” de Selincourt and together they had one child, Christopher Robin Milne, on whom was based the Christopher Robin character of his later Winnie the Pooh books. Milne retired to his farm after a stroke and brain surgery in 1952 left him an invalid. He died in 1956.

Materials on A.A. Milne and monographs of his works are located in the William S. Akin Rare Book Collection in the Wheaton College Special Collections.