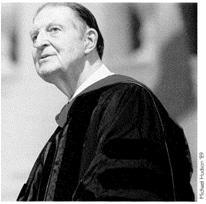 What earlier generations considered a noble evangelical endeavor–the integration of faith and learning–now easily deteriorates into an academic cliche that obscures essentials of the Christian view. Faith becomes a rubber word. It accommodates so many options that it readily invites the notion of faith in faith. It can embrace faith in Allah, faith in Buddha, or even faith in New Age, no less faith in Christ.

For some of its champions, integration need not involve an indispensably unique cognitive content but rather only an openness to reality that escapes rational exposition of the self- revealing God of the Bible. The emphasis on faith instead implies only the challenge of the transcendent, the necessity of religion, the advocacy of the nonrational, the priority of the paradoxical.

If faith is essentially a term of infinite nuances (and not necessarily of a fixed inherent meaning), the term “learning” similarly is laden with ambiguity. It is hardly a summary term for an unchanging body of knowledge, nor need Christians applaud it as the timeless wisdom of the ages. Moses was familiar with the learning of the Egyptians and Daniel with that of the Babylonians, but these biblical spokesmen hardly exalted this into universal truth to be “integrated” with the revelation of Yahweh.

Human learning is subject to ongoing revision and displacement. A science textbook only a decade old is now usually considered outdated, whereas the word of the Lord–so the inspired biblical writers insist–is fixed and final, and Jesus Christ is “the same yesterday, today, and forever” (Heb. 13:8).

Yet some contemporary religionists correlated Jesus Christ the God-man with faith and not with learning, and they internalize rather than objectify all specific religious claims.

The term “integration” raises an additional network of questions. Does it mean a correlation of data that is testable for logical consistency and validity, or simply an open-ended presentation of claims that can be reconciled only in some respects? Are logic and systematic consistency something alien to the Christian revelation? In recent years not a few professedly evangelical theologians have argued that one rationalizes and falsifies Christian truth if one aims to present it as a logically consistent world-life view.

Some mediating scholars emphasize that the Christian revelation must not be confused with the “eternal truths” affirmed by pantheistic and idealistic philosophers. That is assuredly the case. But when this is made to imply that Christian truth is not eternally true, one falls into costly error.

Even the fact that the gospel was temporally and historically revealed and was conveyed in a particular language does not imply that it is not eternally true. It is in fact true yesterday, today, and forever–eternally true–that Jesus’s crucifixion and third-day resurrection are integral to the divine redemption of sinners.

Some confusion over integration of faith and learning seems to have found its way even into Christian colleges and universities. As a consequence the very epistemological foundations of the Christian revelation are misstated or ignored. The unbroken authority of Scripture, that is, the inerrancy of the divinely inspired writings, is minimized or obscured.

Another example of this is the growing tendency to view the insistence of scriptural inerrancy as merely an evangelical distinctive instead of the bedrock of evangelical doctrine. Yet if the canon of Scripture includes erroneous teaching, the process of integration is frustrated since problematically unreliable Scripture cannot be logically correlated either with faith or learning.

Another consequence of affirming biblical errancy is that evangelical campuses are tempted to neglect, or even to avoid, formation of the Christian worldview; on the mistaken premise that this would involve an unjustifiable rationalization of the biblical revelation.

As a result Christian truth is formulated not alone in opposition to speculative philosophies, as is necessary, but regrettably also in opposition to an explicit evangelical world-life view predicated consistently on the teaching of Scripture. Sometimes this maneuver involves a substitution of natural law speculation for an explicitly biblical theology, the minimization of which has implications for the entirety of a revelatory system.

In any event, the epistemological foundations of Christian faith are endangered when Scripture teaching is neglected or considered problematical. In the biblical view; only if one begins with the knowledge of the self-revealing God does one become wise in the knowledge of life.

“The beginning of wisdom is connected with the fear of the Lord” (Prov. 9:10).

The following statement was included at the time of publication in the Alumni Magazine (Autumn 1999):

Dr. Carl F.H. Henry was a Long Island newspaperman when he became a Christian in 1933. He is recognized as a foremost author, educator, lecturer, and theologian. He taught or lectured on college campuses throughout the United States and in countries on every continent. He has written 43 books, some translated into Japanese, Korean, Mandarin, Romanian, and Russian.