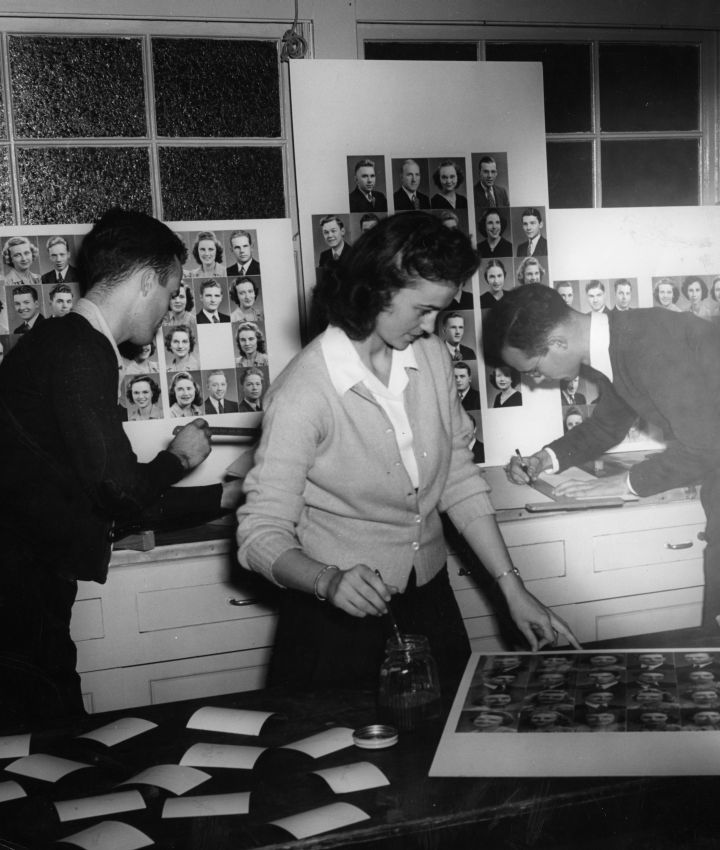 2016 marks the final year in which the hard copy of Wheaton College yearbook, The Tower, is published. Due to budgetary restraints and relative lack of interest among students, the administration decided to cease publication.  From this point forward information will be collected digitally. Collectively, the yearbooks cover approximately 2/3 of the college’s 156-year life, capturing for posterity priceless moments and pertinent personal information.

It was 30 years after the college’s founding in 1860 before students published  the first iteration of the yearbook, Wheaton College Echoes, ’93. An editorial excitedly anticipates a bright future, observing with comic pomposity, “And then, don’t you know, exuberant genius is best developed by at least an annual overflow.” The editors wistfully quote:

That I for dear auld Wheaton’s sake,

Some useful plan or book could make,

Or sing a song at least?

Echoes, publishing advertisements, student and faculty directories and silly anecdotes, continued until 1900 when it ceased publication for reasons now forgotten. After a lengthy absence the yearbook resurfaced in 1922 as The Tower, adopting the traditional format of profiling students of each class and faculty through photos and chatty text, along with chapters dedicated to sports, music, literary societies and various clubs. The editors write:

In presenting the first edition of The Tower, the Junior Class has attempted to concentrate the events of the college year in such form that they will be kept and treasured by the students in years to come….If this book affords the graduate pleasant reminiscences and inspires the undergraduate with a greater devotion to Alma Mater, the Juniors will feel they have accomplished their plan.

Indeed, The Tower, initially printed by Schulkins Printing Co. of Chicago, appeared annually, maintaining traditional packaging with a few notable variations. For instance, the 1941 Tower, edited by artist Phil Saint, is liberally peppered with his own gently humorous caricatures of faculty and campus life. In fact, Saint includes on the final page a cartoon of himself as a stuffed head, Flippius Santus, “now extinct.” 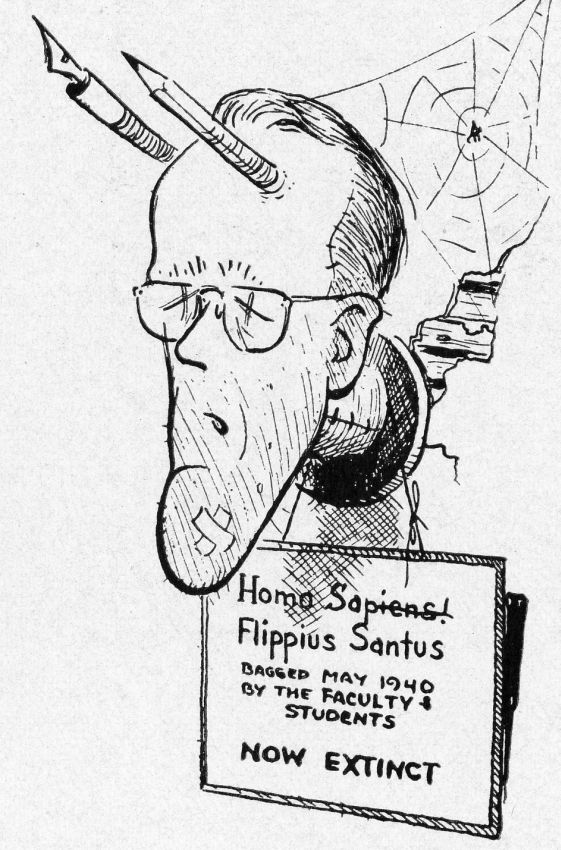 Years later Saint’s brother, Nate, would die with Jim Elliott and four other missionaries at the hands of Waorani tribesmen in Ecuador.

In 1945 a saddle-stitched paperback supplement, The Armed Forces Tower, exhibiting several galleries of Wheaton College active duty soldiers and deceased Gold Star Veterans, was distributed with The Tower. The Armed Forces Tower also exhibits an illustration for the proposed Memorial Student Building, eventually built in 1950 after a fundraising campaign. The structure now serves as the political science department. The supplemental edition also contains Dr. V. Raymond Edman’s famous tribute to the young men and women populating his beloved campus, the “brave sons and daughters true” who carry the gospel of Christ to far countries.

The most innovative packaging of The Tower appeared in 1972, when it was divided into three paperbacks, each profiling an aspect of campus life with artistic photos and scattered poetry. The package includes a cassette tape recording of philosophy professor Dr. Stuart Hackett’s band in concert.

Like any journal, The Tower faithfully records the moods, milestones and fancies of the hour. The College Archives, Buswell Library, where a complete set of The Tower is maintained, bids a fond adieu to this perennially useful historical document.

Why the secular notion of luck should not replace providence.

While conducting doctoral work at the University of St. Andrews, I was challenged to ponder the factors that influenced the church’s theological and institutional development within a secular history department. During that time, I observed that while the cause of historical events was primarily attributed to human action, the mysterious role of fortunate circumstances or “luck” also factored into historical explanations on occasion.

I first became aware of this rationale when grading a freshman history paper, which claimed that Cortez’s conquest of the Incas was successful due to luck. This explanation surprised me, particularly in a culture supposedly moving toward the disenchantment of the world, or Entzauberung, as scholars of secularism purport.

With new eyes, I began to see the offhand comments about luck in all manner of sources. It soon occurred to me that “luck” had become the “providence” of secular culture: that force beyond human comprehension, which could not be ignored, bringing about opportune circumstances for some and not for others at particular moments.

If Tertullian were alive today, he might ask, “What do Christians have to do with luck?” For a believer and an historian of the church and theology, luck is not the ultimate explanation.

I am reminded of a powerful scene in the 1982 movie Gandhi in which Gandhi and a clergyman were walking on the sidewalk together. According to the custom in India at the time, Gandhi was expected to walk in the street. Despite the presence of threatening men, he refused. When the confrontation did not lead to violence, the clergyman—clearly shaken—turned to Gandhi and exclaimed, “Well, that was lucky!” To that, Gandhi pointedly replied, “Ah, but I thought you were a man of God.”

At Wheaton College, we have the precious freedom to integrate faith and learning in the classroom. In my discipline, there are ways to do this responsibly. While we cannot determine God’s will with ease—particularly when considering issues of theodicy—we can be confident in God’s mysterious providence at work in our world and in the course of history without resorting to the secular rhetoric of “luck.”

Moreover, human history reveals many remarkable events from our past, but none can compare to the singular event of Christ’s incarnation in our world. Napoleon’s remarks on the unique power of Christ are worth reflecting upon:

“Alexander, Caesar, Charlemagne and myself have founded great empires, but on what did those creations of our genius rest? Upon force . . . . But Jesus Christ by some mysterious influence, even through the lapse of 18 centuries, so draws the hearts of men towards him that thousands at a word would rush through fire and flood for him, not counting their lives dear to themselves.”

Understanding the ongoing “mysterious influence” of Christ in our world is not a search for luck, but for God’s hand in history.