Relationships emerge in the strangest of places. Decades ago computer dating came upon the scene as a solution for many as a way to meet people. Today, folks spend hours in chat rooms hectically typing away as fast as their little fingers can with bursts of LMK, BTW, and IMO. A secret code of friendship goes on and on with the chiclets of keystrokes.

I didn’t meet Muriel in a chat room as increasingly more and more individuals have met their spouses in this Internet age. I met Muriel on Ebay. Ebay is that vast auction house that has no address other than www.ebay.com. Here thousands upon thousands of new, used, and abused items go on the auction block each day. Eager buyers bid on items ranging from a Donny Osmond Signed Shirt from the Rosie Show to a rare Johnson & Johnson Dental Floss Tin. I met Muriel amidst this wonder.

I met Muriel as I’ve had many others. As the College Archivist every now and then I will prowl the Internet and Ebay for wonders from Wheaton’s past. I search for websites about Wheaton and by our alums. Every few weeks or months I travel to Ebay and plug in “wheaton college.” Often I’m given a listing of used books by faculty or alums of Wheaton. At other times I browse through a list of items relating to the “other” Wheaton, the one in Massachusetts. These items have ranged from coffee mugs to a Public Safety patch emblazoned with the school’s motto, adopted in 1912, “That they may have life, and may have it abundantly.”

Not too long ago I made my usual trip to Ebay and typed in “wheaton college.” To my surprise I saw a listing with the title “Antique Letters (3) and Envelope-Genealogy.” This was my introduction to M. Muriel Ramsay ’26. I quickly placed a bid for the current asking price of $4.00. Admittedly I was bidding against someone who may have had a tie to the letters or to Wheaton, but I quickly rationalized that if the college owned the letters they would become available to others in the college’s archives. I waited with anticipation for the auction to close. You see I had missed out on a large cache of diaries and letters, over 1,000, from two students in the 40s because I hadn’t acted quickly enough. Well, the auction closed and with the addition of a few dollars for postage the letters were on their way from an “Ebayer” in Sioux Falls, SD. 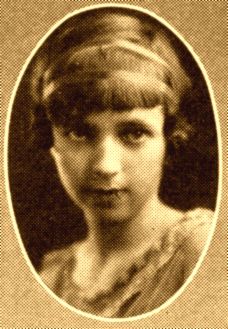 Let it be known that I was not previously introduced to Muriel. I didn’t know her from Adam, or should that be Eve. At the bidding I simply knew that these were three letters written by a Wheaton student in the 1920s to “Vi” and “Jo” in Milwaukee (actually Misses Violet and Johanna Krejci). When they arrived it was clear that my work had just begun.

Who was Muriel? At first reading of the letters with reference to Williston Hall I surmised that it could be Muriel Fuller, ’23, classmate and friend of Margaret Landon. However, as I dug into the other letters they were dated in 1924,too late for Muriel Fuller. Now the chase was on! Using handy resources created by past archivists Thad Voss and Mary Dorsett I searched a listing of students from past college catalogs. This resulted in three possible Muriels. One was Muriel Fuller and the others were Muriel Curtis and M. Muriel Ramsay. Muriel Curtis had also enrolled in the Conservatory, as well as the College. Usually at that time Conservatory students lived locally, though not always. I then looked in the 1922 catalog to see where Muriel Ramsay was from since the older catalogs listed each student’s hometown. Muriel Ramsay was from Milwaukee, Wisconsin. Muriel had a home. I quickly scanned the 1923 Tower to find a photograph or references to her. Muriel was Corresponding Secretary for the Aeliolian Literary Society her first semester at Wheaton and was Assistant Librarian for the Women’s Glee. Muriel had a face and a life.

Muriel’s letters spoke of her joy of being at Wheaton. She described the troubles of her first weeks, but also how she loved every moment. She tells “Vi” and “Jo” that there were “a hundred! social functions that a green little Freshie, simply must take in, during these first glorious days of school life.” She continues that “the spirit of the place simply chases little thrills down my spine one after another. I’m so happy I’m alive!.”

I found a friend on the Internet. From her letters she told of a life of fun, football, missionary zeal, and the love of friends. I’ve not met her personally or talked with her on the phone, but with our shared hope I’m sure we’ll meet someday.