Wheaton College has seen its share of political campaigns and candidates. Many have seen Wheaton College and the surrounding area as a bastion of Republican politics and the number of visits of Republicans, in and out of the campaign season, has reinforced this. The local Fourth of July Parade has often been on the itinerary of the presidential candidate. The connection between Wheaton College and presidential politics may hearken back to Jonathan Blanchard’s own involvement in the political process. Blanchard was heavily involved in the emergence of the Liberty Party while in Ohio and remained involved after his move to Illinois. He recognized the value of political structures to influence change. He was later nominated for the U.S. presidency by the anti-Masonic American Party (not to be confused with the “Know-Nothing” American Party of the same era). Blanchard had asked Frederick Douglass to serve as his vice-presidential running-mate. Douglass declined. 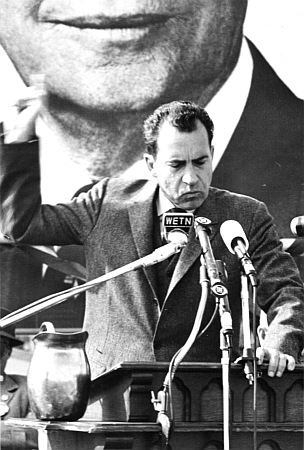 The earliest visit of an actual primary or general election candidate was from Vice-President Richard Nixon. Appearing in a rally on McCully field (text of speech), Nixon was then a candidate for the Republican nomination, which he eventually won. However, as history has shown, Nixon didn’t fair well in the first-ever televised debates. Interestingly, those that listened to the debates via radio developed a different sense of who won. Exhibiting the strength of the visual medium, these debates set a precedence that influenced national politics around the globe with Germany, Japan, Italy and others establishing televised debates for national elections. Back in Wheaton, Nixon played to his crowd calling them to “strengthen the faith of America. See that young people grow up with faith in God.”

In the following presidential election in 1964 Republican Margaret Chase Smith, a senator from Maine and a strong opponent of Joseph McCarthy, visited Wheaton College in March. Smith saw herself as a moderate and this caused her problems on both sides of the aisle. She alienated liberals with her support of the Vietnam War, yet troubled conservatives with her signing on with Democratic legislation. Though unsuccessful in her bid to receive the Republican nomination–losing to Barry Goldwater–Smith has the record as the longest-serving female senator in United States history.

Goldwater, having secured the Republican nomination, visited Wheaton in early October 1964. During his speech Goldwater called for a “restoration of law” in the United States, but a clash of demonstrations occurred between Johnson and Goldwater supporters portended a shift in political ideologies held among students. Local Christian residents attending the Goldwater rally encountered the Johnson supporters and tempers flared with locals calling some students “communists” and questioning their religious commitment, expecting any “good” Christian to vote for Goldwater and the Republican ticket. Some faculty applauded the courage of students to follow their convictions, despite them going against convention. They lamented the fact that charity and tolerance were lacking in the conflict. 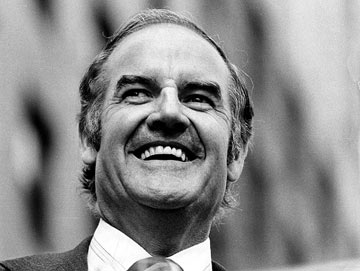 As the Vietnam War dragged on, the gap between parties grew and presidential campaigns needed to be different. That difference came in the efforts of George McGovern. McGovern, the son of a Wesleyan Methodist (Wheaton College’s early denominational benefactor) minister, came to Wheaton College in October 1972 as the Democratic Presidential nominee. McGovern’s speech was less of a political speech than an attempt to help evangelicals understand his theologically-informed political philosophy. This “Gospel According to McGovern” had a mixed reception. Many younger evangelicals supported McGovern, including Wheaton graduate Tom Skinner. These younger evangelicals liked how McGovern expressed real concern for hunger, war, poverty and ecology. However, older mainstream evangelicals looked to Billy Graham, who lent his support to Nixon. The Wesley Pippert Collection contains a great deal of research material on McGovern’s campaign as Pippert was assigned by United Press International to cover McGovern’s campaign.

The most significant season of political stops at Wheaton came during the 1980 Presidential campaign. Illinois has, for a long time, been a key battleground state with its large numbers of electoral votes. The 1980 primary season brought many March visitors to the campus. The first visitor was John B. Anderson. 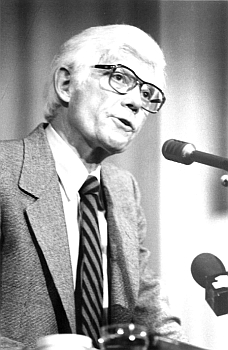 Anderson, from Rockford, was the recipient of an honorary doctorate from Wheaton (LL.D. — Doctor of Laws) in 1970. Though honored in 1970 by his visit on March 12, 1980 feelings on campus were not as hospitable. A ten-term member of Congress, Anderson ran as an independent in the 1980 Presidential primaries. As a member of Congress he, on three occasions, sought to amend the U.S. Constitution to recognize the law and authority of Jesus Christ over the United States. This put him in good stead with conservative Christian voters, but during his race for the presidential nomination he supported certain abortion rights. His endorsement of a person’s right to choose, which he believed was God-given, put him at odds with the same conservatives that once heralded his work in Washington. It is amazing to see what difference a decade can make.

Bolstering the importance of Illinois in the primaries George H. W. Bush made a stop at Wheaton just days after the visit from John Anderson. Bush was battling uphill to beat Ronald Reagan and was being beat by the religious Anderson. After a poor showing in the New Hampshire primary, the former director of the CIA didn’t draw a large crowd–failing to half-fill the cavernous 2,500-seat Edman Chapel. Bush’s future as a candidate didn’t look good. Bush would later return to Wheaton in 1985, as Vice-President, to deliver that year’s commencement address. 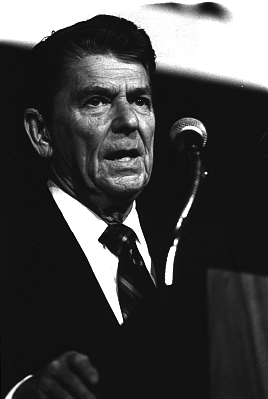 Though Reagan didn’t make a visit to Wheaton College during the primary, he did make a stop in Wheaton to campaign at the flea market the day before Bush’s speech. Reagan made his visit to the college after receiving his party’s nomination during the fall campaign season. The Governor’s whistle-stop visit came October 8th and was accompanied by numerous religious references within the first few sentences of his speech. He spoke of deliverance, rebirth and C.S. Lewis–words that were well-chosen and that resonated with the audience. Reagan would handily beat Southern Baptist Jimmy Carter with Carter only carrying six states with a total of 49 electoral votes, one-tenth the number for Reagan. Carter had been invited to speak at Wheaton in 1981 but declined fearing a hostile crowd (likely considering Anderson’s treatment). 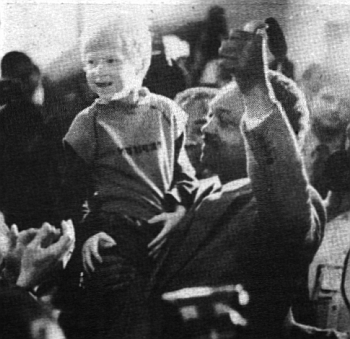 brought Jesse Jackson to Wheaton’s campus holding a rally in Pierce Chapel. Part of a sweep through Chicago’s suburbs Jackson spoke to a large crowd and as one faculty member noted, addressed “biblical concerns for justice, fairness and non-violent social change.”

Nearly as brief as his candidacy was Mitt Romney’s potential visit to Wheaton. Early in the 2008 Republican primary Romney had wanted to hold a rally on the campus the Sunday before Super Tuesday, but was unable to secure permission to campus facilities.

Twenty years has passed since the last presidential candidate has visited Wheaton. Despite the regular note of commentators of the influence of evangelical voters in contemporary American politics and a broad-brush portrayal that indicates evangelical vote lockstep Republican, the history of political engagement at Wheaton College reveals that a finer brush stroke may be needed to accurately portray history. Wheaton has been willing to engage a wide range of political perspectives but also seeks to wrestle with the intersection of those perspectives and the perspectives of Scripture.