Two years after Joseph Smith, the Mormon seer and revelator, was murdered by a mob in Nauvoo, Illinois, another failed utopia took root 100 miles north in Henry County–this one founded by Erik Jansson, the Swedish pietistic prophet with hypnotic eyes who, claiming “sinless perfection,” publicly burned the works of Martin Luther. Fleeing Europe three hundred years after Luther’s death in 1846 with 1200 followers, he embarked on a perilous migration to the United States. From New York the Janssonists sailed via the Great Lakes to Chicago, then rode wagons 180 miles west across rolling grasslands before halting on a fertile patch not far from the Mississippi. 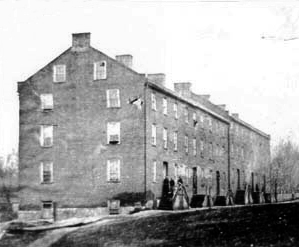 Here they settled the village of Bishop Hill, farming and constructing brick buildings in the same style as those of their homeland. In fact, the church, harness shop, hotel and other structures yet stand. A quick terminus arrived in 1850 when Jansson was shot and killed by John Root, who had married the prophet’s cousin with intent to move away with her, but had been prevented by the commune. Janssonist activities generated such disturbance that Jonathan Blanchard, then-president of Knox College in nearby Galesburg, asked Milton Badger, secretary for the American Home Missionary Society, in an 1848 letter if any ministry could be extended to “these Swedes,” in addition to recommending that a Swedish Lutheran pastor work with “refugees” from the Janssonists. The village struggled after the death of its founder, and was dissolved in 1861.