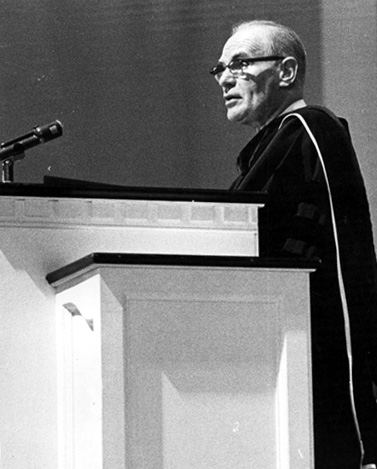 I recently drove past a church and its sign said “Casual Worship, 9:30 a.m.” I know what they meant as they placed this message on their sign, but it also can communicate something completely different. The sign could have some unintended consequences. Evangelicalism is exhibiting signs of broad differences of opinion in the area of worship. As one segment goes further into minimizing worship styles to appeal to a wider unchurched public another segment seeks to retain or heighten the liturgy that has been a part of the church for over a millennia.

V. Raymond Edman’s last chapel address, and his last sermon, was also his last moment on earth. On September 22, 1967, unbeknownst to him he made the topic of his address the topic of worship and how one enters into the presence of a king. The story of this event has reached hagiographic proportions as the fuller story is not told. Edman was preaching about being in the presence of the King, but he wasn’t preaching about this as he faltered and fell to the floor. He had been chiding students about their casual worship–about their wearing ball-caps into chapel, about their chatter as worship began and about their general sense of informality “in the presence of the king.” He was preaching against those who would use the chapel time, and pulpit, to advance their own agenda.

After Edman’s death an edited pamphlet was produced that emphasized the better parts of this final address–the parts that Edman certainly meant to the primary focus of his talk. His biography, written by Earl Cairns, was titled In The Presence of the King.

The Archives & Special Collections has placed the text of the pamphlet online, along with a link to a fuller recording.