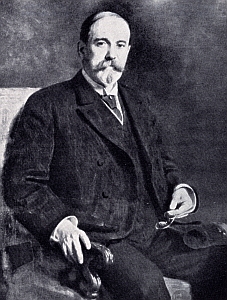 The tract of land called Lawson Field was the gift of Victor Fremont Lawson (1850-1925), friend of Wheaton College and proprietor of the Chicago Daily News — known as a publisher with a conscience. In 1900 when the field was dedicated, acreage, fencing and stands cost about $1500. For the following 90 years Lawson Field was the on-campus home of Wheaton baseball; it now functions as training grounds for various intramural sports programs. Another landmark named after the philanthropic publisher is the Lawson YMCA, a 25-storey art deco structure located at 30 W. Chicago Ave, erected in the early 1930s. The elegant River North edifice, once the flagship for the Metropolitan Chicago Y, was utilized from time to time as additional off-campus housing for Moody Bible Institute students. On the Southside, the University of Chicago’s Divinity School boasts Victor Lawson Tower, designed as a compromise between the classic church-style spire and traditional square-style educational architecture. The chapel’s windows are patterned after the stained-glass in Chartres Cathedral in France; and its cloisters display stones from Christian sites the world over. Lawson met his wife, Jessie, an aggressive real estate developer, in a church choir at Green Lake, WI. After honeymooning there in 1888, they purchased for their summer home 10 acres of land once occupied by Winnebago Indians and settlers. Initially calling it Lone Tree Farm, the Lawsons gradually added more properties until their vast estate, now called “Lawsonia,” comprised 1,100 acres. After the death of its owners, Lawsonia fell into various hands until the General Baptist Convention bought it in 1943 for $300,000. The GBC currently manages the grounds, known as Green Lake Conference Center. 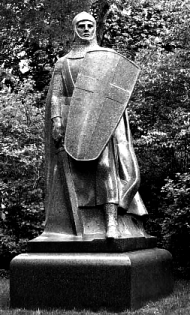 As a youngster Lawson attended Chicago’s first Norwegian Evangelical Church; as an adult he took active membership in The New England Church. During his career he was a generous contributor to the Congregational Missionary and Extension Society. A civic and ecclesiastical benefactor, Lawson’s kindness extended to the workplace as well. Historian John J. McPhaul writes in Deadlines & Monkeyshines: The Fabled World of Chicago Journalism, that the pious, fair-minded Lawson “…gave his staffers turkeys [at] Thanksgiving and Christmas.” Victor Lawson’s grave, located in Chicago’s famed Graceland Cemetery, is marked with a granite crusader bearing sword and shield, symbolizing his sacrificial, militant spirit. It was sculpted by Lorado Taft, who oversaw all stonework for the 1893 Columbian Exposition. Lawson’s papers are housed at the Newberry Library.