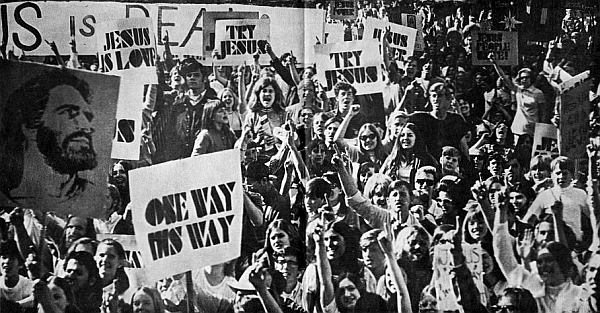 The late 1960s and early 70s were years of tremendous ideological upheaval in the United States, not only in secular culture but also within the church. Christian youth, frustrated with staid worship and lifeless routine, longed for energetic, artistic expression. The Jesus Freaks were not seeking new content for their faith, but instead desired a re-packaging of traditional messages with brighter, hipper wrappings. An example is Larry Norman’s widely-popular song, I Wish We’d All Been Ready, its lyrics lamenting the absence of the unsaved in Heaven after the Rapture of 1 Thess. 4:16-17, the instantaneous “catching away” of Earth’s Christian population immediately preceding the worldwide Tribulation. Norman sets to music doctrines advanced in Hal Lindsey’s best-seller The Late Great Planet Earth (1970), which attempts to succinctly outline biblical end-time events from a premillennial perspective. Another influential text of this time-period is Kenneth Taylor’s Living Bible, a paraphrasing of the scriptures in modern idiom.

In his autobiography, My Life: A Guided Tour, Taylor expresses satisfaction that his work spoke to this audience: “These were the early days of the Jesus People Movement and, concurrently, the charismatic movement. One leader of the charismatics gave me his opinion that Living Psalms was one of the chief sources of nurture within the movement…This youth rebellion took some destructive and damaging forms, but at the same time it produced a sort of counterrevolution…Suddenly great numbers of young people in their late teens and twenties were turning to Christ for the answers they were so sincerely seeking…[They] were a receptive target for the fresh, up-to-date vocabulary and contemporary style of the Living version of the Bible.”

Recently an individual wrote to the Special Collections with appreciation for the influence of the Living Bible: “As a high schooler from 1970 to 1974, [Ken Taylor’s] Reach Out version of the Living Bible made a big difference in a lot of the young people of that era, me included. [H]is dedication to having the Bible in an easy to read format was so novel, so new, that it seems hard to believe now in the 21st century! So praise be to our Lord for using Mr. Taylor to bring the Good News to so many young, impressionable people who are now aging ‘young adults’!”