Carl Sandburg (1878-1967), Illinois poet laureate, collector of songs and Pulitzer Prize-winning Lincoln biographer, resided in Elmhurst, Illinois, from 1919-30, writing for several Windy City newspapers, notably the legendary Chicago Daily News. After three productive, happy decades living in Illinois and Michigan, he moved in 1945 with his family to North Carolina where his wife, Paula, raised award-winning goats on their farm, “Connemara.” There he continued writing poetry and his one novel, Remembrance Rock, in addition to traveling the country, playing his guitar and singing American ballads. Renowned as both felicitious wordsmith and exhaustive researcher, he was hired by 20th Century Fox in 1961 to work on the script for director George Stevens’s biblical epic, The Greatest Story Ever Told. (Stevens also directed The Diary of Ann Frank.) The film, released in 1965, features Max von Sydow, Angela Lansbury, Shelly Winters, John Wayne, Roddy McDowell, Charlton Heston, Donald Pleasence, Sidney Poitier and Telly Savalas – truly an “all star cast.” 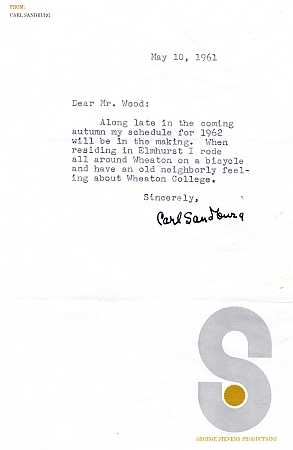 While in Hollywood, Sandburg received an inquiry from a Mr. Wood, who evidently asked about the author’s relationship to Wheaton College. Typing on a sheet of “George Stevens Productions” letterhead, Sandburg responds on May 10, 1962: “Dear Mr. Wood: Along late in the coming autumn my schedule for 1962 will be in the making. When residing in Elmhurst I rode all around Wheaton on a bicycle and have an old neighborly feeling about Wheaton College. Sincerely, Carl Sandburg.”

Though Sandburg receives screen credit for “creative association,” his exact contribution to the project is not fully known. He received the job on the recommendation of Ray Bradbury, who declined the studio’s request that he write the script. Sandburg, born in Galesburg, Illinois, where Wheaton’s first president, Jonathan Blanchard, also served as president of Knox College, wrote in his autobiography, Always the Young Stranger, a rather unflattering portrait of the ever-crusading Blanchard, describing him as “…not one bigot but several.” He felt that Blanchard’s influence, which wasn’t cast in any positive sense, was present for decades after his departure, so much so that one could almost “catch the ghost of him.” To Sandburg Blanchard was the amalgam of a lion, bear and buffalo, and possibly half horse and half alligator!

Sandburg died in 1967. His ashes are interred beneath a boulder called “Remembrance Rock” in the backyard of his childhood home in Galesburg.