In January 1952, just after the opening of the Nicholas Library at Wheaton, Record report Hal Malehorn gave a short and informative history of books and the building that housed them. Below is Malehorn’s account:

Reporter Tells How a Library Outgrew a Building
By Hal Malehorn

With the exodus of the library from Blanchard hall comes a historic narrative–the story of a building and of books.

Back in 1860… the library as such was non-existent. The only texts were the private collections of the instructors.

Blanchard Hall began to grow in 1868. …Then old third floor Fischer library became the chapel, replete with green-upholstered pews. The classrooms clustered around the center section, now used by the business offices.

Right after this came the building of the Tower in 1871, Blanchard’s roof was raised to form the chapel room. In those days there were stairways on either side of the building, outside, And Pres. Jonathan Blanchard had letterheads printed even then with the drawing of Blanchard hall, exactly as it is now.

Third floor west end housed the girls. The boys’ “dorm” was on the floor above. There was even an elaborate elevator to haul coal, ashes and occasional enterprising individuals up and down. Winters were cold, and coal stoves were in vogue, and atomic solar heat was still some decades away.

The present physics lab was originally a large, well-kept parlor, while the chem. lab directly beneath it served as dining hail and kitchen until 1927, when another general shifting took place.

Loyal Celts and Belts held forth in what are now the first floor finance offices. Aels scheduled their society for the present biology lab.

Meanwhile, the library was growing. As books accumulated, a small room was reserved for them in the first floor center section; the music teacher was dismayed to find himself in charge of the room.
Several years later, the shelves transferred one floor up, and the books were moved en masse into what is now the registrar’s office.

1890 was an epic date for Wheaton. That was the year a great pipe organ was installed in capacious Fischer chapel. It was the first pipe organ in town, and Wheaton folks were rightly proud. As a result of this, the chapel had to be rearranged.

Opera chairs were installed, $1.25 apiece, the old green-upholstered pews migrated to various back yards and front porches, and some even lined the walls of the new library room. In 1890, too, central heating was installed in the basement, creating an audible hazard for the chapel worshipers up on third floor.

In addition to books, the new library room housed the book store, which was operated: by students until 1908, when the college took over.

By 1913 the college owned an amazing 10,000 volumes, all of which were arranged according to shelves A, B, C, section 1, 2, 3. Professor Rice had heard of a new-fangled Dewey decimal system, and so one summer he and three daughters, with a $600 stipend, catalogued the entire library. This was the beginning of the modern Wheaton college library.

1927 was another great year in the history of books and buildings. That was the year the final east addition was made. Included in the wing was the Frost reference library, into which many of the books were moved. It was not long, however, before the library was again bulging at the seams.

Consequently, in 1936 the stacks were removed from E201 and placed in the former Fischer chapel. This necessitated an entire reinforcement of the center section of Blanchard from the basement up. Two years later the final segment of stacks was added in Fischer.

And then in 1950 came Pres. V. Raymond Edman’s announcement in chapel of the gift of the new library building. That library is now a reality.

This is the newest chapter in the story of buildings and books. 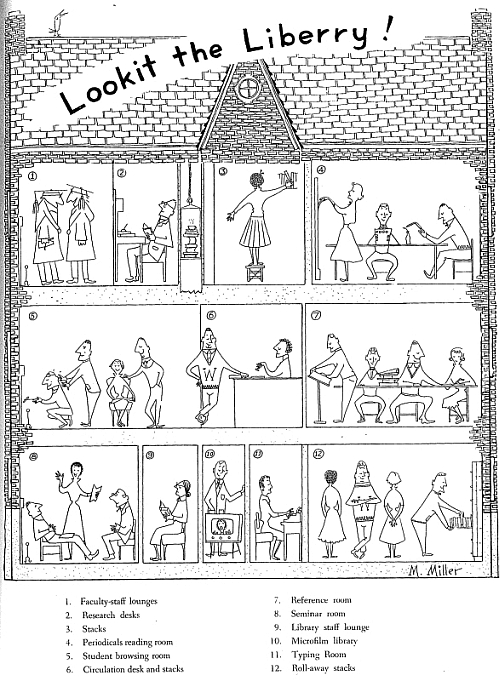