The Senior Bench at Wheaton College is one of the oldest and most legendary rivalries in the school’s 150 year history. According to dusty archives files and whispers of oral tradition, the graduating class of 1912 is believed to have bequeathed a hefty concrete monument to solidify its place in the annals of her alma mater. 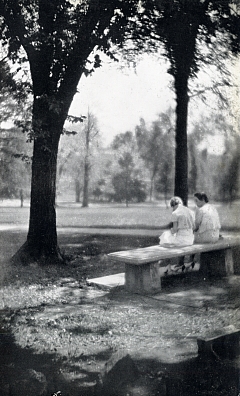 Anchored in front of Blanchard Hall and first photographed for the 1934 Tower yearbook, it was intended for seniors only, but through the decades envious undergraduates soon coveted it’s prized status. A great rivalry began in 1949 when juniors from the class of 1950 stole the top two foot by seven foot section while the seniors where away on their annual retreat.

Many ingenious, inventive, and sometimes illegal methods have been employed by rival classes in their passionate pursuit of securing this nearly 800-pound stone slab. During the 1950s an exact replica was cast by the class of 1957 in a fool hearty attempt to trick the other classes, yet to no avail. The class of 1959 is heralded for one of the most amazing bench showings as it suspended the bench from a helicopter and flew it over the Homecoming football game.

Another infamous bench caper was hatched when seniors from the class of 1963 traveled by train to Colorado for their yearly retreat. As the train stopped at Mendota, Illinois the bench was shown by the juniors who had arrived by car to taunt the seniors. A melee ensued and a scheduled thirty second stop erupted into a two hour delay as railroad agents, local police and the Interstate Commerce Commission were all summoned to sort out this violation of federal law.

The current rules surrounding possession of the bench were enacted after seniors from the class of 1966 showed the bench in chapel and were greeted by slashed tires and cut ignition wires in the parking lot. 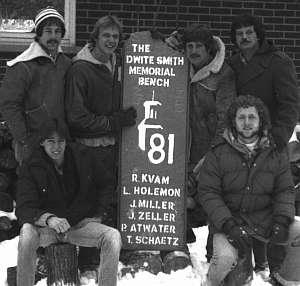 The bench was confiscated by the Dean of Students and mysteriously destroyed while under lock and key. A replica soon surfaced and the tradition was resurrected. Henceforth all bench activity has been limited to the junior and senior classes, the bench must remain within a fifteen-mile radius of Blanchard Hall, half of the bench must be visible at all times, and the bench must be shown twice a year and never in chapel.

In subsequent decades the passionate rivalry has ebbed and flowed as soil analysis kits, airplanes, wiretaps, high-speed car chases, Billy Graham, wishing wells, and even eBay, have all been employed in pursuit of this elusive prize for all Wheaton students.