Deep in Wheaton’s past lies a connection to one of America’s great explorers of the nineteenth century. John Wesley Powell, the great explorer of the Colorado River was known to Jonathan Blanchard as “the one-armed explorer.”

Powell’s family moved to Wheaton, Illinois in 1852. Joseph Powell and his wife had three sons and three daughters when they moved to Wheaton; they also had two married daughters. Joseph Powell was a tailor and a lay preacher in the Wesleyan Methodist Church. In Wheaton they purchased a five-acre tract near the Illinois Institute, a Wesleyan Methodist school, since Powell had been elected a trustee of the new Institute. Powell had also purchased a forty-acre tract, from Jabez Dodge, in an area more distant from the school. By the standards of the day, the Powells were by no means poor. The house on the forty-acre parcel was moved to the five-acre plot nearer to the Institute, utilizing rollers and six oxen. John Wesley would return often to Wheaton, until his parents’ deaths in 1870. The Joseph Powell family eventually held title to 11 separate parcels in the Wheaton area.

The Illinois Institute didn’t offer the courses that stimulated John the most, logic and mathematics. He earnestly desired a college degree, preferably from Oberlin. His education was not directed towards the ministry, as his father would have preferred, and in search of a degree, Powell enrolled at Illinois College in Jacksonville in 1855. For his sophomore year, Powell made it to Oberlin, but returned to Illinois the following year, 1857, and enrolled as a sophomore at the Illinois Institute and actively participated in the Beltionian Literary Society.

It seems that finances were always a point of difficulty for Powell. His father had promised to pay for his education if it was for the ministry, but Powell turned to teaching to earn money for school. He had held a teaching post in Macon County, Illinois before his enrollment at Illinois College.

John Wesley Powell never received the degree that he sought so earnestly. Financial difficulty, his own and that of the Illinois Institute, prohibited this luxury. Also, the late 1850s a severe depression and economic panics to the nation. After his failed attempts at receiving a college degree Powell began taking field trips. On one such trip to Michigan, Powell met his future wife Emma Powell, a cousin of his.

Powell would also take part in the Civil War, rising from private to lieutenant quite quickly. During free time Powell would scour the surrounding area for geological samples and other items of interest, most of which made their way to the Powell home in Wheaton. However, his service to his country cost him an arm in battle. 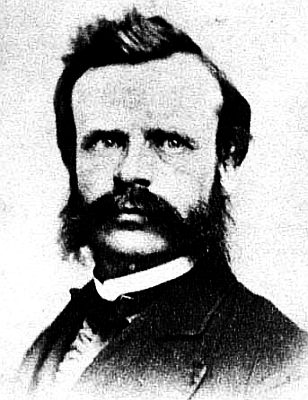 Powell was honorably discharged in January, 1865 and took a position as professor of geology at Illinois Wesleyan. The next year he organized a trip to the Rocky Mountains and was immediately captivated by them and would return often. It was his interest in the west that would place him firmly in America’s history.

Powell had great interest in the Illinois Institute, which would become Wheaton College. As a student, Powell most likely saw the hardships and inadequacies of the fledgling institute. Powell later helped provide for the needs of his Alma Mater. In an excerpt from the Catalogue of 1865 it is recorded that:

“Major J.W. Powell, prompted by his love of science, and friendship for the Institution where he received part of his education, proposes to put up, during the summer, a cabinet illustrating the geology of the west….”