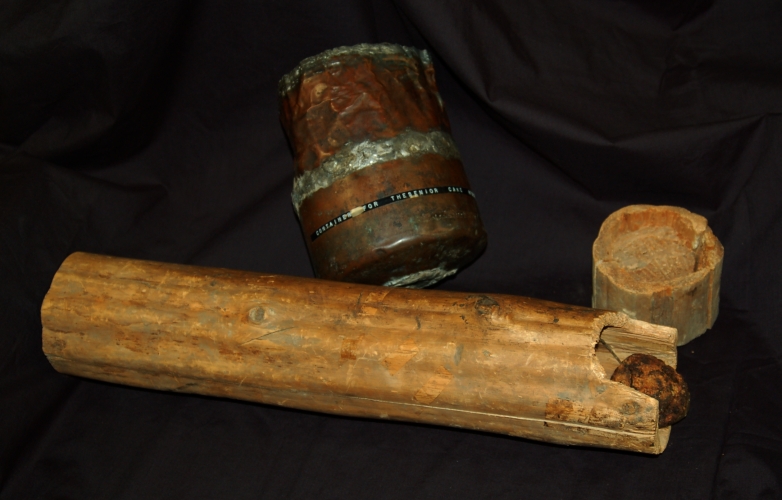 Commencement is over and rented gowns returned. Cakes have been cut and eaten and celebrations have ceased. Fading into memory are the stuff of college days: Class Films, tussles over the Senior Bench and other inter-class rivalries.

One of the class rivalries of old, like the Senior Bench and sophomores hazing freshman, was the Senior Cake. The first Senior Cake was buried by the class of 1925. There was a great deal of class rivalry in those days. For instance, the Class of 1927 kidnapped the Class of 1926’s president so that he could not attend the important Washington Banquet. Fortunately, he was rescued through a broken basement window just in time to attend.

The Senior Cake tradition called for the senior class to bury a fruit cake somewhere on the campus on the first day of class. The Junior Class would have the school year to locate the cake. If the Juniors did not “take the cake” the Seniors would unearth it on Class Day (last day of classes). The rivalry got so out of hand that rules were instituted in 1940 to govern the placement of the cake (e.g. not under concrete, within five feet of a building, more than four feet underground, and others). Due to fake cakes being buried after 1940 the “true” cake bore the signature of the president and dean. The Class of 1930’s cake, which was cared for by Catherine Hurlburt, weighed over thirty pounds. If the juniors failed to find the cake it was placed on a high pole on the day of the Alumni Banquet and eaten that evening.

From 1925 to 1943 the cake had been discovered only twice–the class of 1938 dug through six inches of concrete and three feet of clay to bring forth the prized cake. The Class of 1937 allowed the Tower editor, Carl F.H. Henry, to sell their senior cake once it was unearthed to raise funds for the following year’s yearbook. Pieces were sold for a dollar a piece. That must have been some desirable fruitcake!

Various locations that the cake had been buried were the backyard of the Missionary House (1925), near Williston Hall by the original dining hall parking lot (1943), along the sidewalk between Blanchard Hall, Pierce and Adams Hall (1926), “seventy-five feet from the big tree at the turn of the front campus path” (1937), and, near the southwest corner of Blanchard Hall (1938).