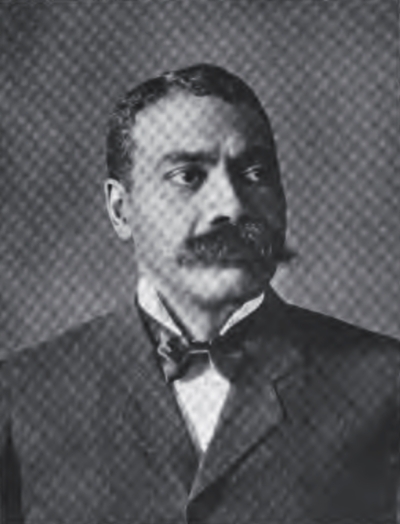 Theodore Wellington Jones was born on September 19, 1853 in Hamilton, Ontario during his parents temporary residence in that city . Soon after his parents returned to their native state, New York, and there remained until Theodore was twelve years old. In 1865 this very large family decided to make Illinois their home and settled in Chicago. Because his parents were poor and unable to give him even a common school education, Jones was compelled to support himself. At the age of fifteen years he was driving an express wagon, eventually establishing a successful express and moving business.

With his business established Jones wished to obtain an education to fill in the educational gaps of his childhood. Through the aid of private tutors and the “midnight oil,” he was able, when twenty-five years of age, to enter Wheaton College, Wheaton, Ill., where he remained three years. After his time at Wheaton he returned to his business in Chicago where his prosperity continued. He became the owner of a large brick storage warehouse at Twenty-Ninth Street and Shields Avenue, along with other valuable property. His business employed at one time three clerks and about fifty men, all individuals of color. In 1894, Theodore W. Jones was elected a County Commissioner of Cook County, Illinois on the Republican ticket. He was known to ably perform the duties of his office and he labored earnestly and unselfishly to advance the interests of African Americans in Chicago. During Mr. Jones’ term of office African Americans Cook County drew $50,000 in yearly salary — about seven times the amount paid into the county treasury by them. He was a valued member of the National Negro Business League and organized the branch league in Chicago, known as the Business Men’s League of Cook County. This league entertained the National League in Chicago, August 21, 22, 23, 1901. (adapted from Daniel Culp’s Twentieth Century Negro Literature)

Jones was considered one of the principal lieutenants of Booker T. Washington’s Tuskegee Machine in Chicago. Following Washington’s ideas, while a member of the Cook County Board of Commissioners and as an officer of the National Negro Business League, Jones sought to seek co-existence rather than integration. He didn’t view the problems of segregation as troublesome as some of his contemporaries. According to Allan Spear, in his great work Black Chicago, Jones said in January 1906 in Broad Ax that “the Southern Negro’s interest in the ballot is on the wane” and that “in these states where the disfranchisement laws are the most rigid, there thrift and repeated success has more than crowned the efforts of the Negro.” Jones later left Chicago, experiencing some difficulties. Records indicate that in 1908 he faced a bigamy charge in Kansas. Several years later he was reported to be in Richmond, Virgnia, where he was secretary-treasurer of the Negro Historical and Industrial Association, promoting the celebration of the fiftieth anniversary of emancipation. (see Giles B. Jackson to BTW, Oct. 26, 1914, Con. 506, BTW Papers, OLC.)