When Rev. Robert H. Schuller moved in 1954 with his wife, Arvella, and two children from a small Dutch Reformed Church in Dolton, Illinois, to Orange County, California, he little dreamed that he would establish one of the most influential – and controversial – pulpits in the United States. He did, however, approach his assignment with soaring hopes, energized by an appreciative reading of Norman Vincent Peale’s The Power of Positive Thinking and Dale Carnegie’s How to Win Friends and Influence People. Weary of calcified congregations and ponderous sermons, Schuller decided to “preach positive,” telling creative, uplifting stories, emphasizing the words of Jesus rather than those of Paul. Implementing his revolutionized methodology, Schuller in 1955 rented a drive-in theater, a suitably unorthodox venue for preaching fresh messages to the secularized “unchurched.” Four miles away he built an additional stained-glass chapel and 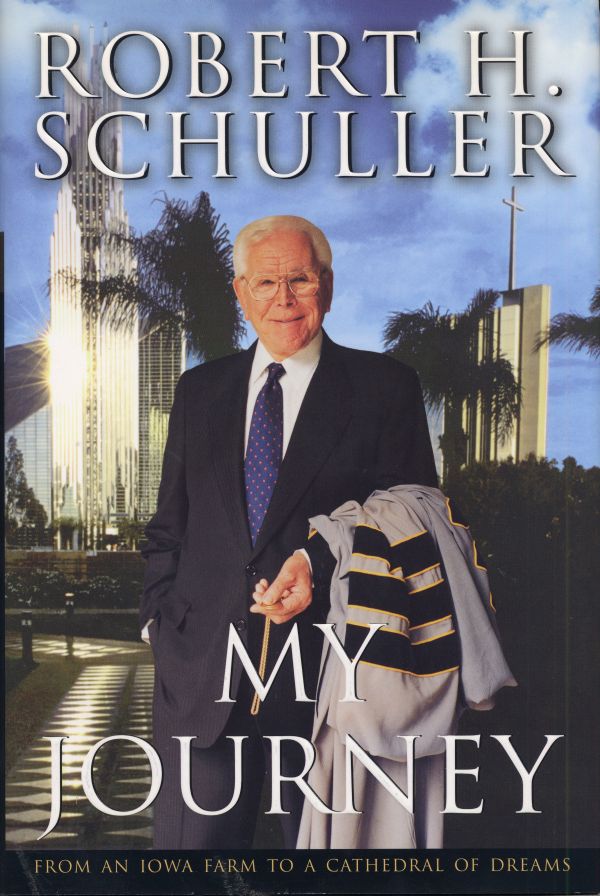 an adjoining “Tower of Hope.” Happily for Schuller, this campus soon outgrew its confines. Not only were structural additions needed, but his outreach expanded to television in 1970, embracing a nationwide audience. The televised services needed a name, so his friend, Dr. Billy Graham, suggested “Hour of Power.” Seven years later Schuller commissioned architect Philip Johnson to design the 17-million dollar “Crystal Cathedral,” which currently functions as the primary campus for Garden Grove Community Church.

Schuller, producing innumerable books and recordings espousing “possibility thinking,” also hosts the annual Institute for Successful Church Leadership conference, where years ago he suggested to a young minister named Bill Hybels that he purchase undeveloped land northwest of Chicago. Hybels wisely did so, acquiring acreage for the ever-growing Willow Creek Community Church, now one of the largest churches in the world. Schuller’s interaction with evangelical Christianity, already significant, intensified in 1977 during a visit to Wheaton College where his daughter, Jeanne Anne, was enrolled:

But Wheaton College in Illinois had been pressing me to speak there, and Wheaton, of course, was Jeanne Anne’s college. She wanted me to come; it would mean a lot to her, she said…She’d had to return to her classes immediately after her summer Holy Land semester. I agreed to fly out and speak at a morning chapel service. I’d get to town the night before, to have some private time with Jeannie. I’d speak the next morning and come straight back home to Carol and Arvella. I wondered if this audience would understand all that I’d been doing, and my desire to see the cathedral built. After all, I was continuing to hear criticism from conservative evangelical Christians. They were, more often than not, very blunt about their opinions – sometimes even brutal. There had recently been a vicious attack against me and the Crystal Cathedral in The Wittenberg Door, a fundamentalist magazine. One page of this particular issue – a page topped by a heading something like “What to do with fifteen million dollars” – had a line down the center. On one side was a long list of philanthropic endeavors. The article had hit the campus just days before I arrived. Jeanne had always been proud of her dad; she loved me and believed in my work. The Garden Grove Community Church was her home. She was excited that I was coming to her school to share with her classmates my enthusiastic faith. The morning I was to address the chapel, posters appeared in the college library protesting my appearance – signs that read “Schuller doesn’t preach the gospel”; “Schuller is building a monument to himself”; “Give the fifteen million dollars to the poor!” We saw the signs on our way to the service. I glanced at Jeanne. Her large brown eyes were as big as saucers. Tears welled up and began to spill over her lower lids, trickling down her cheeks and smearing her mascara. She looked confused. How could they? her eyes seemed to say. There was nothing I could do but make my way into the chapel, give my message, and get out of there as soon as I could. Maybe with me gone, the students would calm down. The next morning I was back in my office, hard at work. The phone rang, and it was Jeanne. Her classmates had been relentless in making cruel remarks to her about her father. She wanted to come home, she said. I tried to talk her out of it and eventually succeeded in convincing her to stay long enough to finish out the quarter. Then she could come home for Christmas; and if she still felt the same then, she could stay home. This solution seemed to pacify her, at least temporarily. So Jeanne came home for Christmas, but she didn’t go back for winter quarter. She needed time to be with us, time away from confrontations with her classmates. She did go back in the spring, however, and she did go on to graduate, making us proud.

In 2001 Dr. Schuller, signing at a Chicago-area bookstore, inscribed a copy of his autobiography, My Journey, for a college staff person: To Wheaton College, the power place for Jesus Christ! Thank you! Phil 1:6, Robert Schuller.