Wyeth Willard served as Assistant to President Edman while at Wheaton (1946-1951) and came to the position right after serving in the military as a chaplain. His personal recollections reveal how much the military influenced him and shaped his view on life and responsibilities.

What could I do for my “Commanding Officer?” First, during those years immediately following WW II, I traveled throughout the country, preaching on Sundays in pulpits such as those of Marble Collegiate Church in New York City [and] Moody Memorial Church in Chicago…I lectured at Princeton University, Brown University, Ohio University at Bowling Green…Second, as Mid-Year Evangelistic Preacher at Wheaton College chapel mornings and evenings of February 10-17, 1946, I emphasized social action and work among the blacks of the area. I urged all students to read Up From Slavery by Booker T. Washington and George Washington Carver by Rackman Holt. Several college classes followed my suggestion and made special studies of these two books.

Perhaps by coincidence, but more likely by the moving of the Spirit of God, shortly thereafter two students from the college visited the black ghetto of Chicago, hired a hall in a needy area, and started a work which grew to such proportions that within a few years every Sunday afternoon several hundred Wheaton College students, at their own expense, traveled back and forth between Wheaton and Chicago. 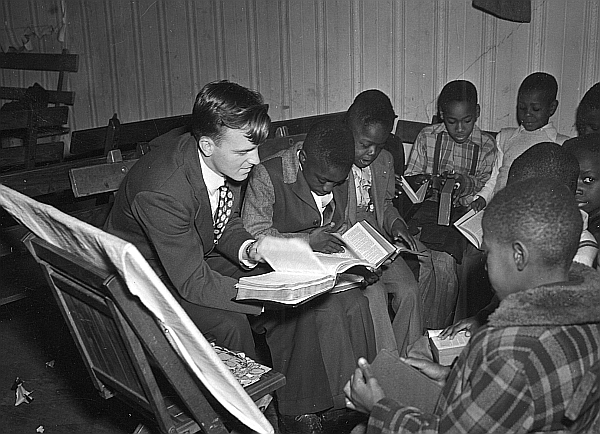 In dedicated gospel teams, they would arrange to meet in suitable halls or buildings, where Sunday Schools could be organized and developed. In order to relieve poor folk of the black ghetto of any financial burdens, by doing without the luxuries which many young people associate with college life, the “lads and lassies” from Wheaton raised their own funds among themselves…These projects which later developed into independent self-supporting churches, not only involved preaching from a pulpit in the conventional manner, but also going up an down the streets of the ghetto, ringing door bells, climbing up back stairs into dark hallways, to bring the message of Christ’s love to the black community…This movement in the ghetto of Chicago, one of the most noteworthy and enduring projects in the history of the college, has received little if any publicity. Five hundred students, more or less, who might have been having weekend drinking parties and sex debauching revelries, were quietly and without fanfare, obeying Christ’s command to bring the gospel to all peoples. For the wee part I was permitted to play in helping to spark this chapter in the college’s history – thank you, Lord!

Just as Jonathan Blanchard spurred students to consider how the gospel influences society, so were students spurred to such considerations nearly 100 years later.