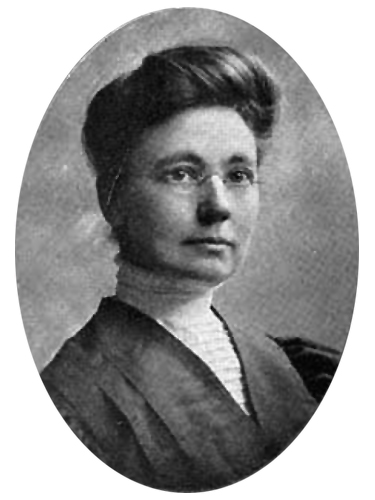 Alma Blount was born in Byron, Illinois on November 29, 1866. She attended local schools and graduated from Byron High School in 1882. Afterward she studied at Wheaton College where she stayed on as an instructor of English after her graduation in 1886. While teaching she continued to take classes and earned a second bachelors degree, the second being a bachelor of science, received in 1890. She left Wheaton in 1893 to pursue further studies at Cornell University where she received her Ph.D. in 1896. Her doctoral work was on “The Original Dialect of the Anglo-Saxon Poem Andreas.” As if this wasn’t enough she also studied at Radcliffe College earning nearly enough credits to receive a masters degree. She also traveled abroad studying at the British Museum, Bibliotheque Nationale and the Sorbonne. She was a member of Kappa Delta Pi, an international education honor society.

Being from small, parochial, Wheaton College did not cause Miss Blount to shrink from a significant scholarly task, one that some felt could not be undertaken at all by an individual. Her life work was “Onomasticon Arthurianum” that was never published. Housed at the Widener Library at Harvard, this massive work sought to be a comprehensive index of personal and place names in the medieval Arthurian romance lexicon. During her lifetime her work was considered the only guide to the sizable body of Arthurian literature In English and was regarded as one stage, the first, in an effort to compile a fuller Onomasticon Arthurianum. Blount’s index was focused upon more than two hundred Arthurian works in ten languages and she recorded her data on nearly twenty thousand slips. When she recognized that she would not be able to complete her work she deposited it at Harvard so that it would profit other scholars. There was professional disappointment at it not being completed, but also an understanding of the magnitude of the task, especially for one person. Despite the serious limitations of her index, Miss Blount deserves the gratitude of Arthurians, not only because she was a pioneer in a work of almost unexampled size and complexity but also because the concrete results of her labors afford a guide for developing a sounder plan of procedure. Her experience made it clear that any new attempt to achieve the Onomasticon must be carried out in several stages or units.

After reaching the rank of full professor Blount retired in 1935. After a lengthy, debilitating illness, she died in Tempe, Arizona on December 2, 1950.