When Wayne Wray initially enrolled at Wheaton College, his desire as a student was to pursue veterinary medicine and oceanography, reflecting his passion for the outdoors. He wrote on his application: “I can offer Wheaton a life dedicated to Christ and believe your acceptance of me will give me advantages I will not find in all colleges. My hope is in Christ and I commit all things to His leadership.” As a sophomore in the fall of 1972, his goal as an athlete was to be the defensive starting end for the Crusaders. Through grueling practice and determination he earned the position. During his first starting game as a varsity football player, playing against Millikan University, he received a critical injury, a fractured and dislocated fourth cervical. Suddenly he was paralyzed from the neck down. He endured three major surgeries in three days. Each time the neurosurgeons declared, “No hope.” 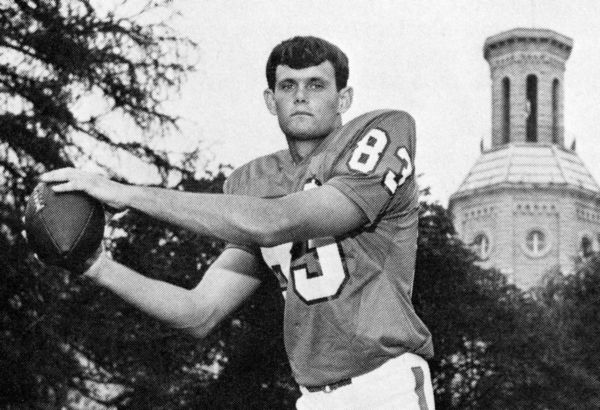 As he lay motionless in the intensive care unit, drifting in and out of consciousness, Wayne prayed and sought God’s will for his life, now so dramatically altered. Strengthened by his faith and the constant encouragement of friends and family, Wayne did not surrender to despondency. Instead, he set objectives and accomplished them one by one, tackling his rehabilitation with the same focus with which he’d played ball. He learned to type, write and print. “He cheers and lifts you up when you go to see him,” visitors remarked. “He’s not bitter, he would play again if his body were healed.” Wayne decided that he would encourage others as a profession.

To assist with medical expenses, classmates raised $100,000 for the “Wray of Hope” campaign. In 1972 Wayne returned to Wheaton College to receive an honorary degree. Following that he earned his associate’s degree from Springfield Technical Community College and his bachelor’s degree from Northern Colorado University. Fulfilling his desire to help others who’d experienced similar injuries, he received his master’s degree in rehabilitation counseling in 1982. That year he also married Jeanette Gaffney, a physical therapist. The wedding was performed by his Wheaton roommate, Scott McClellen. Though Wayne provided a shining beacon for victims of spinal injuries, he faced one more challenge in 1986 when he was diagnosed with cancer. After battling illness for several months, he died at age 34 on January 4, 1987, at his home in Ocala, Florida. As he’d indicated on his college application, he did truly “commit all things to His leadership.” Wayne’s football coach at Wheaton College, Gary Taylor, observed at the funeral, “He taught us about courage because he faced unbelievable odds and time and again beat them…He set goals, saying, ‘If I can only get by today, then I can start on tomorrow.'”

A memorial scholarship in Wayne’s honor was established at Wheaton College to recognize, encourage and financially assist any upperclass student who has faced, or is facing, personal adversity, and who nevertheless shows continued growth in faith, in academic performance and in contribution to campus life.