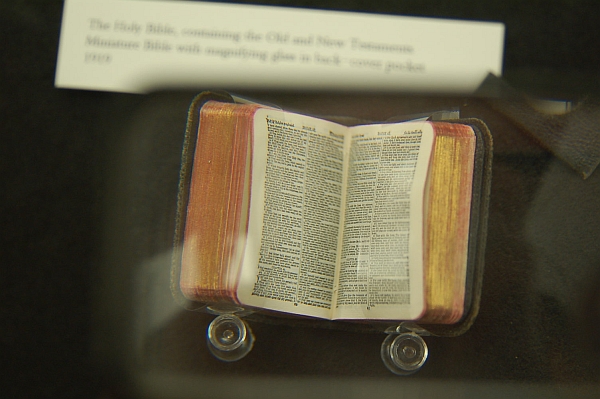 Included in this exhibit is what would be considered a “mite” bible. This miniature bible is just over 1 3/4 inches tall and contains the full text of the King James Bible. The text is so small it requires a magnifying glass to easily read the text. Fortunately the publishers included one in a pocket in the back of the Bible!!

The Bible was published in Edinburgh and London, Nimmo, Hay, and Mitchell and jointly published with Henry Frowde. The publishers had the text printed at the Oxford University Press who had recently acquired the ability to print “micro” text. Some may be familiar with this printing technology through the “compact” edition of the Oxford English Dictionary which allowed individuals to own the gargantuan 600,000 word, twenty-volume, dictionary–that took 80 lexicographers to complete– in just two volumes. That two-volume set, like the mite bible, came with its own magnifying glass, but stored in a drawer. This set was a great enticement to join book clubs like the Conservative Book Club.

The production of this Bible was no small feat in the same way that the creation of the King James Bible was no small undertaking. “Authorized” in 1604 a group of the “best learned” from Oxford and Cambridge, along with bishops and the chief learned of the church” set about the task of translating a Bible for the whole church. After seven years the 47 scholars involved produced what has become the most widely sold book in history. In 1881 when a group set about to revise and update the text they found that “the longer we have been engaged upon it the more we have learned to admire its simplicity, its dignity, its power, its happy turns of expression, its general accuracy, and, we must not fail to add, the music of its cadences, the felicities of its rhythm.” Not until more recent decades has the text of the King James been supplanted by more modern renderings.