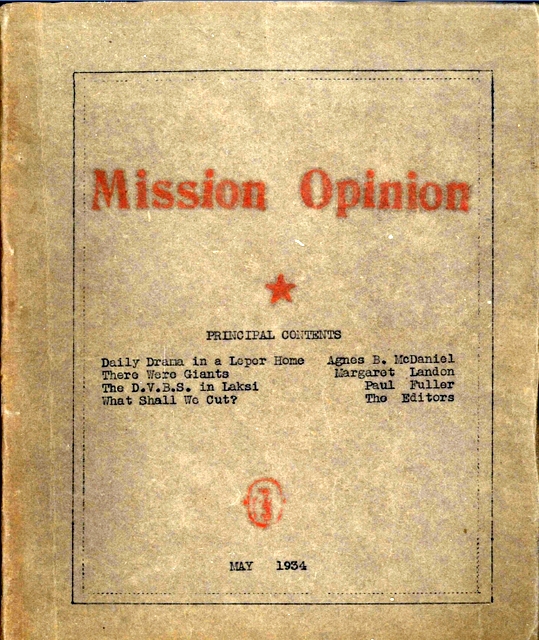 Mission Opinion was a controversial publication edited and published by Kenneth and Margaret Landon in 1934 and 1935, from their missionary post at Trang, Siam. It was a strictly in-house magazine for the missionaries of the Presbyterian Mission, with which the Landons served at the time. Its aim was to facilitate “expressions of opinion by members of the Siam Mission on matters relating to the policies and practices of the Mission.”

The impetus for the magazine was a perceived lack of adequate communication among members of the Mission. The Landons took initiative in starting the publication and financed the printing of Mission Opinion out of their personal funds. They duplicated it in Trang on a mimeograph machine Kenneth had procured from Bangkok. From the outset it was understood that they would publish for “a trial period of twelve months.” A total of 10 issues were produced over the year running from May 1934 to April 1935, ranging in length from 30 to 60 pages.

The Mission leadership may not have been ready for the open exchange of views made possible by such a publication. They are not likely to have welcomed even honest questioning of their policies and discussions concerning the overall direction of the Mission. Mission Opinion included frank discussion of what should be cut from the budget given the decline in the Mission’s financial and human resources in the midst of the Great Depression. The term ‘mission station’ is a throwback to a bygone era whose approach appears to twenty-first century eyes hopelessly entangled with colonialism; yet, a major challenge faced by the Presbyterian Mission in the Landons’ time concerned precisely whether to continue staffing their existing stations, whether to close some, or whether additional ones ought to be established.

Margaret said, “Let’s put out a little magazine of our own.”

Another burning question, to which the bulk of two issues was devoted, was ‘intensive’ vs. ‘extensive’ evangelism. Could they simply nurture those who had made some kind of profession, relying on biological growth as the faith was transmitted from parent to child? Or was it rather necessary to deliberately and incessantly push beyond the boundaries of the fledgling Thai church to the ninety-nine percent of the population who remained outside? Rev. Paul Eakin, the Mission’s executive director, gives his opinion concerning the evangelism controversy in the January/February 1935 issue. He believed that shoring up earlier gains ought to take priority over concerted proclamation in broad swaths of the country which remained virtually untouched by the gospel. History, however, seems to have vindicated the Landons and others who favored a more aggressive outward thrust.