Calvin Miller, author, pastor and professor, died on August 19, 2012. He was 75. His first book, The Singer, published by IVP in 1975, is a poetic, colorful retelling of the life of Christ, flavored with dashes of Milton and Tolkien. In the following years he produced a nonstop flow of novels, non-fiction, apologetics and a memoir, Life is Mostly Edges. 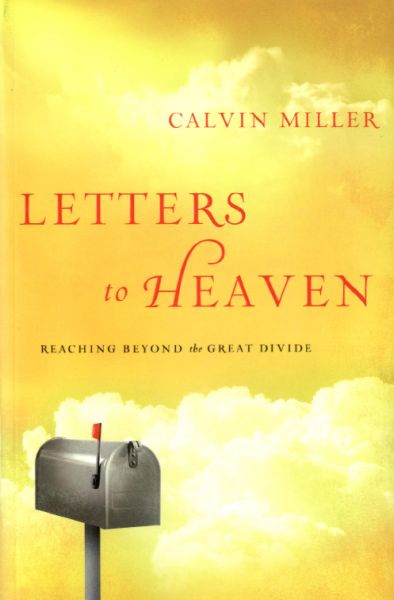 His final book, Letters to Heaven, is a series of letters written by Miller, a late-life nod to the now-deceased men and women who positively touched his life, some of whom he’d met, others complete strangers. He begins with this bit of verse:

How shall I finish up the unfinished business of earth?

Each of you who will receive these letters is dead

at least in this realm

and I am counting on some courier

whose form of delivery I do not know

to get these words through to you.

Composing 26 entries, he cites individuals from personal and professional spheres, including members from his former pastorate, Westside Baptist in Omaha. He recalls Sophie Smithson, whom he “never much liked” because of her scowling aspect and relentlessly critical spirit. Nonetheless, she provided a beautiful foil to her husband, John, whose patience and abundant kindness demonstrate to Miller the binding strength of the marriage vow: For better, for worse, ’til death do us part.

He expresses appreciation for better-known Christians such as Norman Vincent Peale who “taught me effective pulpit communication,” and C.S. Lewis, whose struggle with doubt in A Grief Observed leaves a somewhat sour taste in his mouth. “Maybe [in Heaven],” writes Miller, “in better light, you will display the customary optimism about God that so marked your life.”

A particularly interesting and somewhat surprising entry is actress Farrah Fawcett, at whose home Miller and his family enjoyed Thanksgiving dinner in 1969, just before she became famous. He recognizes her career-long understanding that “beauty is more than skin deep; it is soul deep.”

Sprinkled throughout Letters to Heaven are several names associated with Wheaton College, whether alumni or donors. For example, he thanks missionary martyr Jim Elliot, the “crisis man” whose dedication forced men to “turn one way or another on facing Christ in me.” Miller writes, “My whole life was redeemed by your counsel.” Miller thanks 911 hero Todd Beamer. “The hero you never meant to be became a legend in the world you had to leave.” Again discussing the matter of matrimony, Miller thanks author Madeleine L’Engle, with whom he was a member of the Chrysostom Society, for her strong, long marriage to Hugh Franklin – and her steady continuation with life after his death to cancer. He thanks publisher Harold Shaw, meeting him but once for dinner in 1975 with Luci, “…your dear wife and my only important poetic fan in the beginning…” The Shaws encouraged Miller to continue writing after the publication of The Singer, pushing ever forward.

Now that Calvin Miller has joined the subjects profiled in this book, readers may consider his generous writing, ripe with humor, hard-won wisdom and sanctified imagination, as letters from Heaven addressed to those yet confined to Earth, awaiting passage.