Dr. John A. Huffman Jr., pastor and author, recently published his memoir, A Most Amazing Call, chronicling the ups, downs and byways of his extraordinary life. Born in Boston, he earned his undergraduate degree at Wheaton College, his graduate degrees from Princeton Seminary. 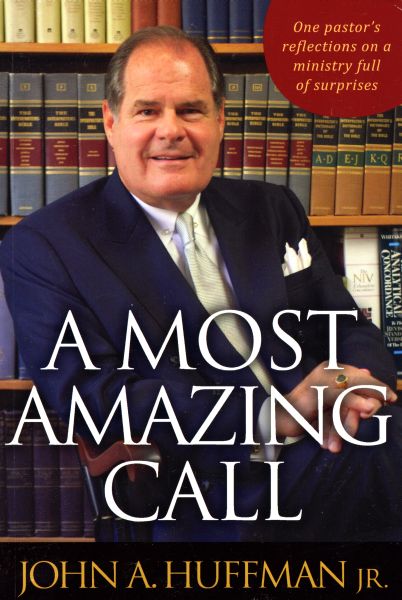 While studying at Princeton, he served as an assistant under Norman Vincent Peale, pastor of Marble Collegiate Church in New York City. “My life ever since,” Huffman writes, “has been so much richer for the opportunity of knowing him as both a friend and a mentor.”

After serving other pastorates, Huffman was called in 1978 to assume leadership at St. Andrews Presbyterian Church in Newport Beach, California. Exploring wide-ranging interests involving the Christian life, he has published nine books, including The Family You Want and Forgive Us Our Prayers. He has served on the boards of several influential evangelical organizations, including Christianity Today, Gordon-Conwell Theological Seminary, World Vision and the National Association of Evangelicals.

Huffman attended both Wheaton Academy and Wheaton College. Reflecting on his schooling he writes:

There were also great professors who opened to me new horizons intellectually, politically and spiritually; too many to list in this space. They helped me integrate the world of ideas with my Christian faith….In particular, I will be forever grateful to the chairman of my history department, Earl Cairns, who shaped my philosophy of history…And I was exposed to many outstanding chapel speakers such as Vernon Grounds, Leighton Ford, Richard C. Halvorson, Robert Boyd Munger, Bill Bright, Harold Ockenga, V. Raymond Edman, Hudson T. Armerding and Billy Graham — all whose friendship and counsel I have valued through the years.

Retiring from St. Andrews in 2009, he considers his life of service:

As I have now concluded my first 70 years, I move into a new era. My title is “honorably retired.” My 47-year call to local church ministry is now complete. From now on I will simply endeavor to do whatever the Lord lays on my heart as literally “minister-at-large.” What I hope to do with the rest of my life is to continue to lead men, women and children to a personal saving faith in Jesus Christ…

Huffman and his wife, Anne, have three daughters.