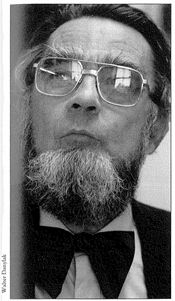 During our first year of marriage, Joyce was finishing her work at Case Western Reserve University in Cleveland, and I was teaching high school in nearby Euclid. One of my responsibilities was to supervise a study hall in the school’s cafeteria where the students typically spread out around the spacious room, some of them taking up a whole table.

One kid drew my attention. He was at a table by himself and was moving books and notebooks around, scribbling a note here and there. I noticed he was smiling, and I thought I could hear him humming, too. Now, when a teacher observes a kid smiling in a high school study hall, there are several possibilities–Is this kid concealing a frog or snake in his shirt and is he is planning to let it loose to test out this new teacher’s skill at riot control? And that smile–was it a smirk or a impious grin? Trying to appear authoritative, I wandered over toward his table. He was underlining in a book and sure enough, he was humming a bouncy tune, When our eyes met, I said, “You’re Brian, aren’t you?”

“Yes, I’m new this year. Brian, you seem to be enjoying yourself this morning. You’re smiling a lot, and I heard you humming a song. What gives? Why do you look so happy?”

Brian’s response was instantaneous and genuine. “O, that? That’s just the Lord shining through.”

Obviously, Brian had not been admonished sternly enough to keep God out of his life as a public high school student. The spontaneity and brightness of his faith–what was inside him–showed on his face and was evident in his voice.

Often many of us portray a positive appearance that does not nicely dovetail with the “stuff” inside ourselves. Which means that sometimes we force an appearance, and we deliberately, some would say dishonestly, act in such a way to appear to he something we really aren’t.

What is in the core of our being? When anyone is “in Christ,” that person becomes a new creation. Christ profoundly changes our core. With that transformation we become capable of absorbing and transmitting the qualities of His Spirit–love, joy, peace, long-suffering, gentleness, goodness, faith, meekness, and self-control.

This is the “good stuff” that presumably becomes integrated into the essence of who we are. If all that “good stuff” is an authentic part of me, then why doesn’t it bubble out more? Sometimes, I think it’s because we believe our Christian faith is a very private experience. But when we contemplate what Christ has done in us, how can we really keep it for ourselves? The “good stuff” is too good to be kept private. It is natural to spread the Good News everywhere. Another reason we don’t express what Christ has implanted in us is that we have not tended the garden inside adequately. Inside we are empty and sick and cannot bring ourselves to admit candidly how little of the “good stuff” we have. We need resuscitation, a new commitment to the Lord, or a refilling with His Spirit.

I struggle with dissonance between the realities of who I am and how I present myself. But I have learned from times like this that it’s okay, deeply okay, to let my core–even when my core is in a state of disrepair–to be revealed among caring people who love me in my brokenness; these people hold me up, and they send me on my way. That’s what Christian community life does for each of us who is needy. The personal and social toxins all around are minimized when caring people blow in spiritually pure air and offer us cool, refreshing cups of water. So even when we are less than the ideal, each of us has power to minister to one another with Christ’s Spirit and to overcome these toxins.

Because Jesus taught that every disciple when fully taught will be like his teacher (Luke 6:40), it is fair to ask who our teachers are. Cultural ways of doing things, religiously sanctioned beliefs, and focus on people’s physical appearances can distort the reality underneath. Our preconceptions about poorly clothed people, or someone illiterate or socially crude, can keep us from understanding the essence of who these children of God really are.

How well-rooted at our core are we in Christ-centered values? And does this “root system” function adequately when others need to see the authentic Jesus shining through? Does the Lord Jesus inside us make a difference in the way we appear to others? Does He come through spontaneously and joyously? Does He attract others to Himself?

I don’t know what is best for stirring us to deal with the incongruity of our inward reality with our outward behavior. Gentle persuasion and cogent argument work for some. A direct in-your-face approach works for others. It doesn’t matter. We must come to terms with a process of living before others in a way that draws upon the qualities God’s Spirit has imbedded in our inner core. Then we may be in the position where the mouth speaks out of the abundance of the heart (Luke 6:45).

Twenty years ago, the Wheaton Alumni magazine began a series of articles, titled “On My Mind”, in which Wheaton faculty told about their thinking, their research, or their favorite books and people. Former Professor of Sociology Emeritus, Ivan Fahs ’54 (who taught at Wheaton from 1981-2001) was featured in the Autumn 1997 issue.