It isn’t often that a professor of history is allowed to participate in history, if only fleetingly, but Dr. S. Richey Kamm, Professor of History, Political Science and Social Science at Wheaton College, sat very close to William Jennings Bryan, three-time Democratic candidate for President of the United States and one of most flamboyant and influential figures of the day.

Bryan, “The Great Commoner,” championed causes like prohibition and women’s suffrage. In 1921 he visited Wheaton College, lecturing forcefully to faculty and students against the theory of evolution, later using those very arguments in his seminal debate with attorney Clarence Darrow during the 1925 Scopes Monkey Trial. Ironically, theistic evolution eventually won the day at Wheaton College. Bryan was famous for his “Cross of Gold” speech, which responded to those demanding a currency based upon a gold standard. He shouted, “We will answer their demand for a gold standard by saying to them: You shall not press down upon the brow of labor this crown of thorns, you shall not crucify mankind upon a cross of gold.”

In 1924 young Kamm heard Bryan speak in Greenville, Illinois. He writes on the back of the photo:

You will find me seated on the table at the left of the picture. This shows only a part of the crowd. It stretched out for a long way on each side. They had quite a time with the old fellow with the ear trumpet. He got up on the platform and got his trumpet so close to Bryan’s mouth that Bryan had to stop and get the old fellow a chair. 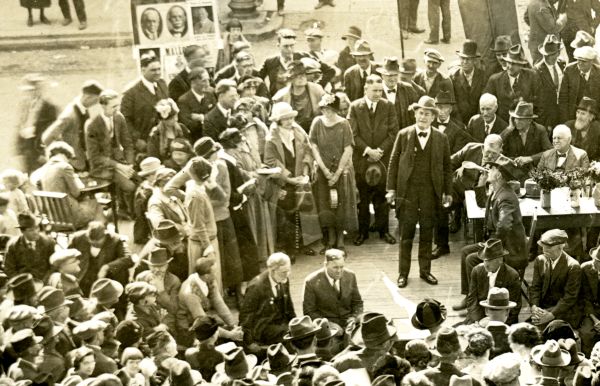