Muriel Arney of Red Oak, Iowa, was born totally blind in one eye, and partially blind in the other. But with a determined heart, she engaged life with more focus than many who are fully sighted. Writing an autobiographical statement for her Wheaton College application, she remarked, “I broke my arm in third grade while coasting. The pain wasn’t bad, missing school was terrible.” 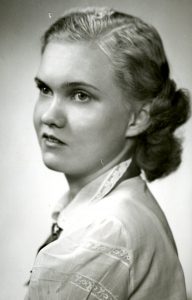 This statement summarizes Muriel’s relentless love of learning. Afflicted with a “spastic” leg ailment in addition to her blindness, Muriel managed to convey a radiant love for people and education. “There is nothing that she will not try or do,” wrote a former grade school teacher, “and she wants no sympathy.”

Walking with a cane, Muriel maneuvered efficiently throughout campus, carrying a tape recorder under her arm for recording lectures and class discussions. Listening intently to the sounds all around her, Muriel recognized fellow students and professors by their voices and footsteps, remembering names, though she hardly knew many of them. While enrolled at Wheaton College, she learned Braille and studied with friends as her vision worsened to total blindness, accompanied by terrible throbbing headaches. Navigating chapel aisles or crowded hallways, she was terrified that someone might jostle her and detonate the excruciating pain.

While attending the winter evangelistic services on February 7, 1957, the guest preacher, Reverend H. Lawrence Love, delivered the closing prayer as Muriel listened with her head bowed. Looking up, she was greeted by a stunning surprise. “There was my roommate,” she said, “plainly visible to me; the pain was entirely gone. How shocked I was! As soon as the service was over, I said to my roommate, ‘I can see!'” Later that night during a prayer meeting in Williston Hall, Muriel saw for the first time the girls who had been assisting her. The next day a medical examination proved 20-20 vision in her left eye. The Psychology Department chronicled the event as a genuine miracle.

Graduating from Wheaton College in 1959, Muriel continued her education at Illinois State University in Normal, Illinois, and eventually completed her teacher’s certification. Suffering further operations, she used crutches and braces for support as she commenced her career as a teacher to those with disabilities. Suffering deeply but ready to testify to her savior’s abiding love, Muriel Arney died in Red Oak on December 26, 1968, after an acute five-day illness. Her life verse was II  Samuel 22:33, “His way is perfect and he maketh my way perfect.” Muriel’s mother, Pauline, wrote to Alumni Magazine, “May the testimony of her life for her Lord continue to be an influence and a blessing in the lives of her host of friends.”