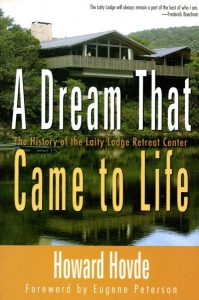 Laity Lodge, situated in the Frio River Valley near Leakey, Texas, overlooks a magnificent vista of forested hills and jagged rock. Far from urban chaos, this retreat stands as a haven for those needing to explore pressing questions, absorb the peace of the Spirit, or simply run into God.

Founded in 1961 by Howard Butt, Jr., the lodge welcomes its guests to encounter the sacred in privacy or community. Visitors to the canyon sing, walk, converse, eat and pray. Trusting every guest to engage all available resources, each retreat is opened with these words: “We have an agenda, but we don’t have an agenda for you.”

Frederick Buechner, author of Godric and The Sacred Journey, was a frequent speaker at Laity Lodge, where his recorded lectures have been transcribed and published as The Remarkable Ordinary (2017). He recalled:

On my first visit to Laity Lodge, when I was told not to turn left at the Frio River but in the Frio, I knew I had reached the land of Oz. After my first few days there I knew that, more even than Oz, it was a holy place. The high hills spoke of it. The river spoke of it. The “blue hole” where we swam spoke of it, as did Betty Ann Cody’s a cappella singing of “There Is a Balm in Gilead,” which left my face streaming with tears and which I will remember until the end of my days.  I don’t believe I have ever known a place as full of human kindness and openness and grace as I have found in virtually everyone I met there….I doubt I will ever get there again, but it will always remain part of the best of who I am.

Theologian J.I. Packer, author of Knowing God, said, “Laity Lodge…is one of the Christian world’s best kept secrets. Personal maturity in Christ is what it was and is about, and its ministry goes from strength to strength.”

Madeleine L’Engle, author of A Wrinkle in Time, spent one month each year for a decade at the Lodge. She began one lecture series declaring, “I am very blessed to have been here for this month in this place which, I believe, is holy and healing.”

Eugene Peterson, pastor and translator of The Message, supported Laity Lodge’s efforts to erase the distinction between the “full-time” minister and the layman. He wrote, “…That seed quickly  matured into a lifelong determination to do whatever I can to abolish this expert/layperson division in the Christian community.”

The story of Laity Lodge is chronicled by former director Howard Hovde in A Dream That Came to Life: The History of the Laity Lodge Retreat Center (2007).