The Reverend Jim Jones, ordained by the Independent Assemblies of God and the Disciples of Christ, founded the Peoples Temple as a haven for the poor, the lonely and the forsaken. Unlike too many churches of the 1950s, the Temple was integrated and radically multi-ethnic. Fearing nuclear strikes during the Cold War in the vulnerable Midwest, Jones and his loyal congregants moved from Indianapolis to California, eventually settling in San Francisco, concentrating on aiding the oppressed and impoverished.

Timothy Stoen, a graduate of Wheaton College and Stanford Law School, met Reverend Jones in 1968 while employed as a deputy district attorney in San Francisco.

Angry over racism and social disparity, Stoen was impressed with the large numbers of African Americans attending Jones’ church. He told an interviewer, “I had never seen such love between black people and white people — white people actually going up and physically hugging and touching black people and making them feel at home. I remember having seen Jim Jones go up to a little old black lady and just saying, ‘I love you, darling,’ and her eyes just shone.” Joining the People’s Temple, Stoen defended it against attack and offered free legal advice.

Reverend Jones, awash in bitter allegations and spiraling paranoia, relocated his congregation to the humid jungles of Guyana, establishing the People’s Temple Agricultural Project, also called Jonestown, where Stoen sent his six-year-old son, John Victor, to be communally raised. In 1977 Stoen resigned his job with the district attorney and moved to Jonestown to join John Victor. After Stoen returned to California for a short period, his ex-wife, the former head counselor for the People’s Temple, revealed to him that Jones’ “miraculous” healings were fake.

Pressure on the Temple increased as news agencies reported financial fraud and human rights abuses. Daily the tropical socialist utopia crumbled beneath Jones’ mental instability. Awakened to the mounting danger, Stoen fought to retrieve his son, but Jones refused. Members promised they would die before surrendering John Victor to Tim Stoen or the U.S. government. On November 18, 1978, Jones, desperate and totally unhinged, ordered his followers to drink grape Flavor Aid (not Kool-aid) laced with potassium cyanide. Sadly, they obeyed.

As hundreds of men, women and children dropped choking and vomiting to the ground, Jones, speaking calmly through a loudspeaker, exhorted his surviving disciples in San Francisco to “get” Tim Stoen. Continuing his rant, Jones ominously prophesied that the young attorney with “nobody else to hate” would finally destroy himself. By the end of the day, 907 people lay dead, including 304 children. John Victor was found poisoned in Jones’ cabin, and Jim Jones lay dead from a gunshot wound to the back of the head, delivered by an unknown assailant.

Jonestown remains the largest mass murder in history. Historians note with irony that were it not for this event,  Reverend Jim Jones would be remembered as a great civil rights leader.

In the years following, Timothy Stoen successfully resumed his career as a California prosecuting attorney. Despite professional success, he bore profound grief. He writes in his memoir:

But I also had deep guilt for violating the “moral code” — for sinning against God. Guilt for replacing the whole truth of God with the half truth — the idolatry — of ideology. Guilt for violating fidelity in marriage. Guilt for giving Jim Jones credibility while blinding myself by ideological passion to his emerging flaws. Guilt for making numerous untrue statements, and committing other moral compromises along the way.

As Stoen struggled with his haunted memories, it seemed that Jim Jones’ prophesy was proving true.

Reading several key books, particularly M. Scott Peck’s People of the Lie, Stoen began to somewhat comprehend the evil of Jim Jones and the psychological dynamics of the cult. He writes in his journal, “…This reading is making me see that I have a deep-seated passion for communion with God.” After hearing Alan Jones preach at Grace Cathedral in San Francisco, Stoen spent Good Friday, 1988, meditating on the stations of the cross.

In response to that utterly poignant Good Friday, I recognized the truth that Jesus Christ had suffered and died for me, that he had then conquered death, and that he was now offering — to all who asked — forgiveness for the wrong things they had done. I asked Jesus the Christ for forgiveness. Miracle of miracles, I was given it. The grief was assuaged. The guilt was gone. Mercy had triumphed. The curse — Jones’ further trespass into Satan’s dominion — was smashed. The prophet was vanquished. 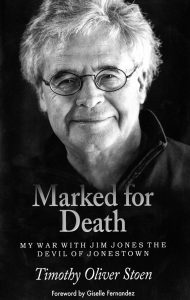 On June 26, 2000, he resumed his career as a California prosecuting attorney. He was nominated in 2010 to the California District Attorneys Association as Prosecutor of the Year, and in 2014 was honored as one of the five top wildlife prosecutors in the state. Stoen tells his remarkable story in Marked for Death: My War with Jim Jones the Devil of Jonestown (2015).