Standing before her classroom of Wheaton College students, Dr. E. Beatrice Batson was known to recite the exquisite verse of Donne, Herbert, Crashaw, Homer, Dante and particularly Shakespeare. A gracious Southern lady, she exhibited both an unaffected dignity and an unassuming humility. 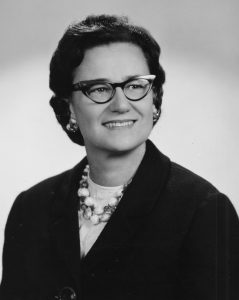 During the years of her retirement, Dr. Batson would reflect on her nine decades of life, her reading and travel, and tell her own stories rather than those of her beloved poets. I visited Dr. Bea every other week or so at her retirement home and she shared a few with me. Seated in her recliner while sometimes breathing with difficulty into a respirator, a red blanket tucked beneath her chin for warmth, she retrieved the chapters of her full life from shelves laden with memory.

She remembered when Dr. V. Raymond Edman, fourth President of Wheaton College, occasionally tasked her with editing his devotional books. She would delicately dodge the gig whenever possible to avoid hurting his feelings because she did not like his flowery, mystical style of writing.

On another occasion, when I asked her for a character reference for my registration as an online student at Bob Jones University, Dr. Bea confided that she, too, had attended Bob Jones College, then located in Cleveland, Tennessee, way back in 1938. For how long? “For ten days,” she replied in her deliciously cool, dry drawl. She remembered attending a production of Shakespeare’s Richard III, in which the founder’s talented son impressively portrayed the murderous hunchbacked monarch, though for that performance he had forgotten to limp. “Aside from that,” she added, “he sure was good looking.” When she broke the news to Dr. Bob, Sr. that his college was not for her, he objected. “Bea,” he said, “that just don’t make sense. And if it don’t make sense, God must not be in it.” But it made sense. She moved from there to George Peabody College, then Vanderbilt University and Bryan College. God was in it.

Teaching English at Bryan College from 1947-57, she remarked that she “loved that little school,” but endured a few administrative challenges posed by its president, Dr. Theodore Mercer. She was reticent to comment on those years. When opportunity knocked, she departed Bryan College with the highest recommendations, heading north to Wheaton, Illinois.

On another visit she recalled a 1970’s trip to England with Dr.  Clyde Kilby, Chair of the English Department at Wheaton College and founder of the Marion E. Wade Center. Dr. Kilby handed her a meatloaf as a gift for the aging widow of Charles Williams, an Inkling along with J.R.R. Tolkien and C.S. Lewis. Evidently, the characteristically austere Mrs. Williams was “quite pleased” to receive the dish. Why? Dr. Bea shrugged, observing in her drollest intonation, “For pity’s sake, I cannot fathom why a meatloaf would arouse such excitement.” The details behind the meatloaf caper remain a bit sketchy.

In the following months it became increasingly apparent that the vivid colors of her memory were fading. Her focus was loosening. Books stacked on her bedside table, much-loved titles by Dorothy L. Sayers, Walker Percy and P.D. James, remained untouched. One day she matter-of-factly announced that her manuscript on John Bunyan had been accepted by a major university press who would soon publish it with minimal editing. Congratulations! But I knew that her Bunyan book had been published in 1984.

On the afternoon of my final visit she was awake, though faint and sleepy, lying motionless  in her recliner beneath the blanket. After briefly chatting, I held her hand, then stood in the doorway. “Goodbye, honey,” she said, her voice brittle with age and illness. “I love you.” I love you too, Miss Bea.

Three days later, like the hero of The Pilgrim’s Progress, she entered the Celestial City. The red blanket is cast aside. The respirator is unplugged. Beatrice Batson soars and sings in Henry Vaughan’s “great ring of pure and endless light, all calm as it [is] bright,” joining C.S. Lewis, V. Raymond Edman, Clyde and Martha Kilby, Dorothy L. Sayers, Bob Jones, Madeleine L’Engle, George MacDonald, Theodore Mercer, Shakespeare and all the adoring multitude of students, family and friends who’ve preceded her through the golden gate.

Professor Batson (1920-2019), Professor Emerita of English at Wheaton College, served as Chair of the Department of English for thirteen years and taught courses in Shakespeare for thirty-three years. Professor Batson was the author or editor of 14 books, and the author of numerous chapters in compiled works. During her teaching career, she was a frequent lecturer on college and university campuses in the United States and Canada. After her retirement Professor Batson became the coordinator of the Batson Shakespeare Collection in Special Collections, Buswell Library. She developed the collection into a unique resource bringing together the best scholarship on Shakespeare and the Christian tradition.