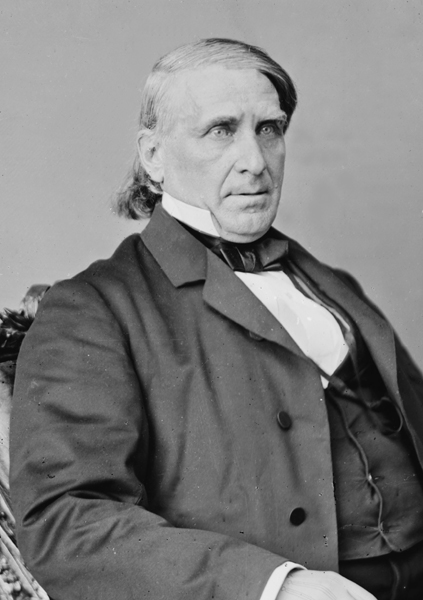 One of the earliest endowed scholarships was made in the name of Elihu B. Washburne by his wife. Washburne was born in Livermore, Maine on September 23, 1816. He had attended the local common school and later become a printer’s apprentice, eventually becoming assistant editor of the Kennebec Journal in Augusta, Maine. He also studied law at Kents’ Hill Seminary and Harvard Law School. He was admitted to the bar in 1840 and moved to Galena, Illinois to practice law. A member of the House of Representative from Illinois, Washburne was also a delegate to the Whig National Conventions in 1844 and 1852. He served in Congress from 1853 to 1869, where he had been chairman of Committee on Commerce. A strong opponent of slavery, Washburne became a leading figure in the group that became known as the Radical Republicans (1854-1877). He was appointed, quite briefly (less than two weeks), Secretary of State under President Ulysses S. Grant, resigning a few days afterward to accept a diplomatic mission to France. He was the only foreign minister who remained at his post during the days of the Paris Commune in 1871, protecting Germans and other foreigners left behind by their delegations. In 1877 he returned to Illinois, settling in Chicago where he served as president of the Chicago Historical Society from 1884 until his death on October 23, 1887. Three of Washburne’s brothers (Cadwallader C. Washburn, William D. Washburn, and Israel Washburn, Jr.) were politicians and Washburne’s son, Hempstead Washburne, was mayor of Chicago from 1891 to 1893.