Jeremiah Wright has become a volatile political figure in recent years. Though recently retired from pastoral ministry, Rev. Dr. Wright has described himself as “toxic” to the Obama administration after his comments about the history of race and race-relations in America from the pulpit of Trinity United Church of Christ in Chicago were scrutinized in the press. Obama had been a member of Wright’s South Side Trinity Church. 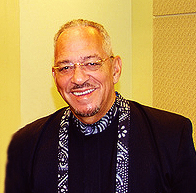 Despite his recent tangles, in 1996 Wright’s expertise on African-American church history was recognized and he was invited to give Wheaton’s African-American Church History Lecture. He followed the previous appearances of Dr. Larry Murphy (Professor of the History of Christianity, Garrett-Evangelical Theological Seminary) and Ms. Sherry Sherrod DuPree. The lecture series began in 1994 to introduce “interesting themes from a Black American religious experience and history to the Wheaton student body.”

Over 250 people gathered to hear Rev. Wright’s lecture “The Black Church Since World War II: The Invisible Giant.” He addressed the growth and development of the Black church and the impact on society in terms of facilitating the Black middle class, particularly highlighting the social transformation of the church and the way gospel music illustrates those changes, and the African heritage which continues to express itself in the church and community.