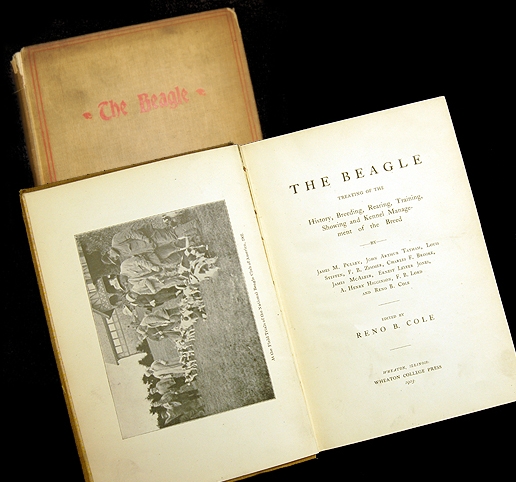 When some here the title The Beagle their minds may be drawn to Charles Darwin, but at Wheaton College this may not be the first thought to emerge. For “Wheaties” the thought should run to The Wheaton College Press, of course. Well, maybe not “of course.” The Beagle: treating of the history, breeding, rearing, training, showing and kennel management of the breed is quite a mouthful and was the result of the editing efforts by Reno B. Cole and was published by the Wheaton College Press in 1903. Cole was enrolled at Wheaton and studied art, science and literature over an eleven year period. After leaving Wheaton he made his way to DeKalb, Illinois. He became an authority on beagles.

Few know the history of the Wheaton College Press. However, the staff of the Archives & Special Collections have gathered together a variety of sources to tell its story. 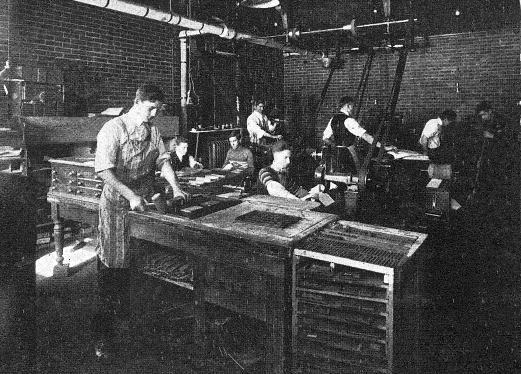 The press was begun when the college received a Marder and Luse press as a donation. Using the model of manual colleges like Knox and Berea colleges had been, Amos Dresser, Jr. and Charles Blanchard envisioned a press that could save the college money as well as employ students. Amos’ son, Ernest, was the first manager. As the press expanded another press and other equipment was added. The press employed nearly two dozen students at its peak. The college used the press to print and publish its own publications, such as the Record, Echo and Catalog. 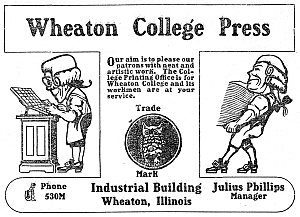 In its last years the expenses outpaced receipts and outside business accounted for less than two percent of revenue. The last known manager was Julius C. Phillips. When he finished college in 1920 and new technologies, such as four color printing and lithography, emerged the press lagged and then remained unused.

Below is a bibliography of known titles produced by the press. You will note the wide range of subjects covered.

Monrad, John Henry. A. B. C. in Cheese-Making. A Short Manual for Farm Cheese-Makers. Wheaton, Ill: Wheaton College Press, 1894.
[note: Monrad was a dairy expert with the U.S. Dept. of Agriculture]