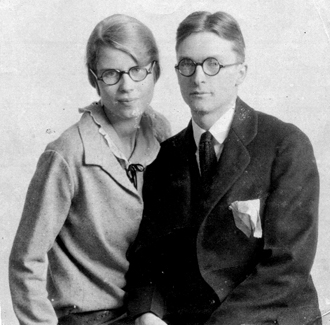 Not only was Kenneth Landon ’24 involved in the incipient efforts by the U.S. government to organize its foreign intelligence during and after the Second World War (as reported here), he was also a remarkably well-educated man, with impressive institutional credentials to match his wide-ranging intellectual, and especially linguistic, gifts.

More than a decade before he received his doctorate from The University of Chicago in 1938, he attended Princeton Seminary after being graduated from Wheaton College with a philosophy degree. Princeton had by that time become embroiled in the fundamentalist-modernist controversy that marked the era.

The dramatis personae of these tragic events at Princeton pit, on one side, the president, J. Ross Stevenson, whose tenure as president began in 1914, and Charles Erdman, long-time student advisor and professor of homiletics, against Robert Dick Wilson, a talented Semitic philologist, and J. Gresham Machen, to whom students referred, with gibing affection, as “Das”. Despite the opposition and with the approval of the faculty, Erdman’s ouster took place in 1926.

The seminary class of 1927–Landon’s class–was, in his generous judgment, the most brilliant and talent-laden that the seminary had had for fifty years. More certainly they among the last classes ever to walk the halls of Old Princeton. In 1929, Machen was to lead a number of Princeton faculty in the founding of an alternative Presbyterian seminary, Westminster Theological in Philadelphia, Pennsylvania.

In the 90-plus-hour “Landon Chronicles” oral histories, Kenneth and his wife, Margaret ’25 (of Anna and the King of Siam fame), tell about the controversy as they knew it from within and give their judgments on the falling out. According to them, Stevenson had a habit of splitting every institution he touched, not unlike the habit, Margaret mentions in passing, of a more local Presbyterian controversialist, Wheaton College’s third president, J. Oliver Buswell. He had his share in splitting institutions too, thus proving the byword, attributed to the ousted Charlie Erdman, that Presbyterians are like hickory: split easily.