Larger Than Life: The Red Grange Story, a documentary produced, in part, from resources housed in the Archives & Special Collections, has received an Emmy nomination from the Mid-America Chapter of the National Academy of Television Arts and Sciences for Best Historical Documentary. The winners will be announced on Oct. 9, 2010. 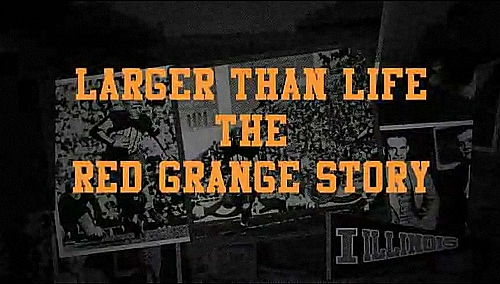 The documentary is on the life of Harold “Red” Grange interwoven with the story of the creation of a new Grange statue commissioned by the University of Illinois. Originally broadcast on the Big Ten Network, Larger Than Life presents Grange as the sports superstar that transformed professional football and helped firmly establish the National Football league. The 45-minute long documentary is available for viewing online and is full of primary source materials and interviews with sports historians and other noted individuals. One of the historians interviewed is Gary Andrew Poole, author of The Galloping Ghost: Red Grange, an American football legend. As with Poole’s book, the University of Illinois utilized several images from the Grange collection that are unique to our holdings in its production.