Southeastern Baptist Theological Seminary, Wake Forest, NC, announced yesterday that the Francis Schaeffer Foundation had selected the seminary to serve as custodian of the Francis Schaeffer papers. It is interesting that Schaeffer’s papers will reside at a Baptist institution, despite Schaeffer’s life-long relationship with the Presbyterian tradition. Reinforcing this relationship is the Francis A. Schaeffer Institute at Covenant Seminary in St. Louis, Missouri. In response to questions about the paper’s new home, Deborah Middelmann, Schaeffer’s daughter, stated that

“My father was a very odd man. Had it been given to a more logical place it would have been very inappropriate.”

Below is a biographical sketch that accompanies the collection of Edith and Francis Schaeffer’s papers at Wheaton College. 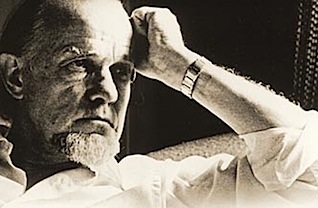 Francis August Schaeffer IV was born on January 30, 1912. Raised in a blue-collar working-class home, Fran, as he was called, learned the value of work from his father. Later, as a minister, he lifted up hard physical labor and working with your hands as the calling of God.

Though he valued physical labor it was intellectual effort that would characterize Schaeffer’s legacy. Purchasing a text on Greek philosophy by accident, it grabbed Fran’s interest and opened the door to his intellectual pursuits. Further studies in philosophy led him to explore basic questions about the meaning of life. This set Schaeffer on a path of search and inquiry.

In late summer 1930 Schaeffer attended a revival and experienced an old-style, sawdust trail, conversion. His new found religious fervor was coupled with his emerging intellectual appetite. In 1931 Schaeffer began his studies at Hampden-Sydney College in Virginia. With the nickname “Phily,” Schaeffer worked his way through school, continuing to value the synergy found in combining physical work with intellectual pursuits.

In the early summer of 1938 Schaeffer and his family moved to Grove City, Pennsylvania to pastor the small Covenant Presbyterian Church. There were few children in the church and the Schaeffers helped organize and teach a summer Vacation Bible School–the first summer, in a church that had no Sunday school, seventy-nine children attended. However, not all of their early efforts were as successful. Their efforts to reach college students at Grove City College failed. However, with Schaeffer’s preaching and encouragement the church grew and in less than three years they built a new building and the membership exceeded one hundred.

In 1941 Fran began serving as the associate pastor of the Bible Presbyterian Church of Chester, Pennsylvania, outside Philadelphia. He served this church for less than two years. Though his ministry was marked by compassion, Schaeffer was known to display a quick temper that expressed itself in sudden outbursts among his family.

In 1943 the Schaeffer family left Pennsylvania for Bible Presbyterian Church in St. Louis, Missouri. Here Schaeffer’s ministry was known as one of personal hard work and working his congregation hard. Shortly after his third daughter’s birth in 1945 Fran traveled Europe for three months on behalf of the American Council of Christian Churches and the Independent Board for Presbyterian Foreign Missions visiting different churches in order to learn about their situation following the war. On his return he reported on his journey and its personal toll. Though it was one of his greatest spiritual experiences, it exhausted him. After months of recovery and a return to his pastoral duties, Schaeffer was given another leave to travel and speak in preparation for a meeting of the International Council of Churches meeting to be held in Amsterdam in August 1948.

The trip began an over-three decade involvement with Christian activity in Europe. One of the key friendships that began in Holland was with art critic and professor, Hans Rookmaaker. After the meeting in Amsterdam the family moved to Switzerland. Here they lived and ministered to those they met, particularly Americans military personnel. 1951 marked the beginning of a spiritual revival and renewal for Schaeffer and his ministry. He had been in Europe for three years, facing the crisis of how best to communicate the gospel in a culture that was not his own. He struggled to communicate to those who had suffered through two destructive wars and whose churches had spurned a biblical theology. He reaffirmed his belief that the Christian faith is rooted in the revelation of God in the Bible. By this time the Schaeffers were living near Champery, preaching in a small Protestant chapel located in a heavily-Catholic canton.

After returning from a seventeen-month furlough in the United States where Schaeffer taught at his former seminary, Faith Theological, he perceived fractures in his denomination. The Schaeffers were concerned for the future of their ministry. Some of his teaching generated controversy and their financial support suffered. However, the Schaeffers returned with a fresh emphasis upon trusting God with financial cares. It was in this context that in 1955 L’Abri, (“the shelter”) would be started, first in Champery and then in Huemoz in the Canton of Vaud. One of the hallmarks of L’Abri was a continual trusting in the provision of God for their needs from the original down-payment to purchase Chalet les Melezes to monies needed to buy everyday necessities. 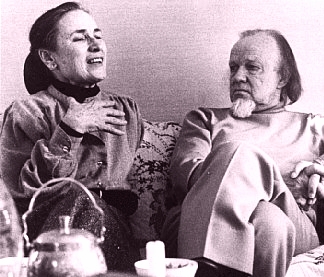 The Schaeffers described the purpose of L’Abri as showing forth by demonstration, in life and work, the existence of God. Fran and Edith came from opposite backgrounds and it was this diversity that would be exhibited in those who came to stay at L’Abri. Students from diverse backgrounds–Zoroastrians, Buddhists, Hindus, atheists, agnostics, liberal Christians, Roman Catholics, and others of various anti-Christian and Christian views–came to their door from all over the world. Over the next decade and a half the work of L’Abri was extended to England and through broadcasts on Trans-World Radio. These efforts served to draw more seeking answers to the little Swiss village.

Schaeffer’s ideas and talks were in great demand. He was invited to speak at European universities and Ivy League schools. Accomplishing what few could, Schaeffer easily packed Princeton Seminary’s chapel. His twenty-one books have sold in the millions and have been translated into at least twenty-four languages. Some of his influential titles are The God Who Is There (1968), Escape from Reason (1968), He Is There and He Is Not Silent (1972), How Should We Then Live (1976) and Whatever happened to the human race (1979). His last books before his death were the best-seller A Christian Manifesto (1981) and The Great Evangelical Disaster (1984).

Diagnosed with cancer in 1978, Schaeffer felt that he had accomplished more in the last five years of his life than he had in all the years before he had cancer. Francis Schaeffer died early in the morning of May 15, 1984. An ally in pro-life efforts, Ronald Reagan remembered Schaeffer “as one of the great Christian thinkers of our century.”