Alexander Grigolia, before resigning from the faculty of Wheaton College in 1945 to accept a professorship at Eastern Baptist Seminary, chaired the department of anthropology. During his nine years at Wheaton, Grigolia studied not only humanity, generally, but men and women, particularly as these unseasoned youth daily brushed elbows with him in the corridors of Blanchard Hall. His insights into human nature provided invaluable guidance for grateful students. For instance, cartoonist/evangelist Phil Saint remembers in his memoir, Saints Alive (1986):

But I had a mind to get me a wife while still at this school where so many lovely Christian girls were. So one day several months later I went to consult Dr. Alexander Grigolia, head of the department of anthropology. I respected this good man’s wisdom. “Well, Mr. Saint,” he said, “how things are going?” A European-trained scholar, he had a quaint way of inverting his word order. I knew what he meant. He also had a way of guessing what was on a person’s mind. “Well,” I answered, “I have a list of prospects…Of course,” I added, reddening, “they don’t know anything about this yet.” Looking seriously at me, Dr. Grigolia nodded. “Tell me who they are,” he said. I named several I deemed very nice Christian girls. When I came to Ruth Brooker, Doc brightened visibly. “Ah,” he declared, ” she is execkly feeted for your life! You must get her!” I didn’t really know Ruth very well, but his enthusiasm excited me. “Tell me more, Doc, tell me more!” I exclaimed. I listened with great interest. And as soon as I could I made a date with that girl. After just four dates I was wildly and hopelessly in love. Ruth’s spirit, her sparkling humor, every adorable change of her features as she talked or listened, were all I could dream about. For a whole week I found study impossible. My body went to classes, but my mind was preoccupied – with Ruth. Chaffing like a race horse at the starting gate, I waited for classes to finish so I could see her again. Putting my feelings into words as we sat one night on the porch swing at her home was the hardest thing I ever tried to do. The setting was perfect for a proposal. Moonlight threw a pattern of shadow and silvery light around us, and a soft breeze rustled the rose arbor. And Ruth was so near! After struggling for the right words, I finally gave up. Instead of proposing marriage, I just asked Ruth to pray about the future of our relationship. Ruth had already prayed and knew what it was. In the library the next morning, as I bent over to whisper something in her ear, I saw she was making up a list of bridesmaids! 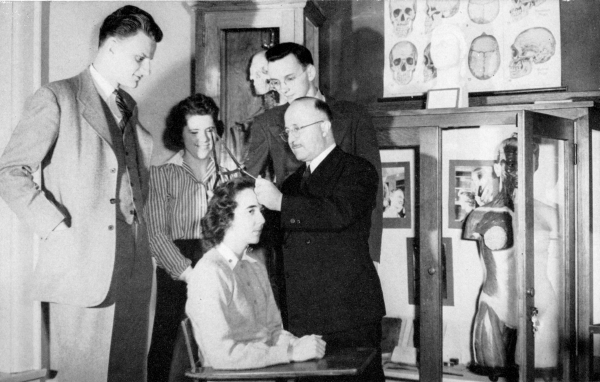 Likewise, Billy Graham in his autobiography, Just as I Am (1997), writes that Grigolia was one of the primary reasons he decided to major in anthropology, a discipline that would stimulate empathy for differing religions and customs should the young evangelist enter the foreign mission field:

The head of the college’s new anthropology department was popular among the students, “Don’t leave Wheaton without a course in Grigolia” became a favorite saying. Short and rotund, with flashing dark eyes and an accent that hinted at his Russian birth, he had received one Ph.D in Germany and another at the University of Pennsylvania; he had a medical degree tucked in there somewhere too. In a corner of his crowded little office, ever watchful, stood his faithful colleague Josephine, with whom I was to make a quick acquaintance; she was a full-sized human skeleton. Dr. Grigolia ardently convinced us that the origins of the human race were not up from the ape but down from the hand of God, as Genesis recorded. His humorous mistakes in the King’s English were a continuous source of merriment. Once when he was at the blackboard and a couple of students were whispering to each other, he said, without turning around, “Would someone please pipe him down?”

Serving thousands of churches through much of North America, Pioneer Clubs has a rich connection with Wheaton College. In 1939, a freshman at the college starts Girls Guild. Betty Whitaker later renamed the fledgling organization Pioneer Girls. As the ministry grew a summer camping program was begun in the 1940s. Camp Cherith was launched and then replicated in over a dozen other states and in Canada. By the next decade a National Camp Council was formed to set program, safety and facilities standards for all the Camps Cherith that were being established.

To celebrate its 25th anniversary and to tie-in with the pioneer theme of its curriculum, Pioneer Girls embarked upon a cross-country covered-wagon trip. The 1970s through to the 1990s saw the expansion of the club programs, both in age-ranges of its curriculum and the gender of its participants. Pioneer Girls became Pioneer Clubs and the overall organization called Pioneer Ministries.