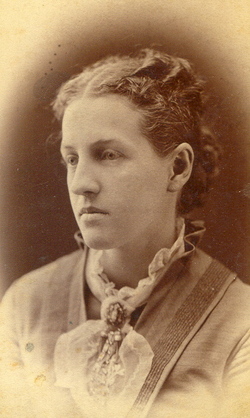 In our age of technological sophistication and advanced medical sciences that easily prolong the live of many who would otherwise have perished it is somewhat shocking to read the stories of those who die young, especially during the throes of childbirth. Such is the story of Rowena Hudson Stratton. Born November 8, 1852 in Topeka, Indiana to Timothy Hudson (1823-1899) and Ann Louisa Wolcott Hudson (1829-1919). Rowena attended Wheaton College from 1872 to 1874. While a student she met John Leander Stratton, class of 1876. Stratton was the younger brother of Samuel Fay Stratton, class of 1865. They were married on October 24, 1877 in Noble County, Indiana. She died very young on July 26, 1879 in Wyanet (LaGrange County), Illinois. It would appear that Rowena died in childbirth as she is buried with her infant, unnamed, daughter. After her death a memorial scholarship was established in her name.