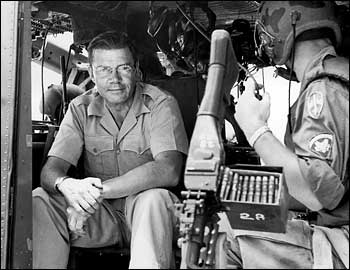 February 4 marks the anniversary of the first U.S. helicopter being shot down over Viet Nam in 1962, just two months after helicopters arriving in Viet Nam to provide assistance to the South Vietnamese troops. There are few names associated with the entry into and the escalation of U.S. involvement in Viet Nam than Secretary of Defense Robert McNamara. He had overseen the growth of U.S. military non-combatant “advisers” from 900 to 16,00. There were well over one-half million troops in Viet Nam by the middle of 1968. McNamara’s legacy is tied to the Viet Nam era and the military strategies employed. Despite the negative assocations his defense expertise and intellect were still sought after. On February 4, 1988 McNamara delivered the the annual Tiffany Lecture on Foreign Affairs at Wheaton College. Mr. McNamara spoke on “Our Survival in the Nuclear Age.”

The Tiffany Memorial Lecture on Foreign Affairs aims to foster interest in and understanding of international affairs at Wheaton. The Tiffany fund was established to honor the memory of Orin Tiffany, a long-time Wheaton history professor who had a passion for foreign affairs. Prof. Tiffany had the honor of attending the 1945 San Francisco Conference that established the United Nations. Past speakers include Zbigniew Brzezinski, Mark Hatfield, John Lewis Gaddis, Robert Pastor, Anthony Lake, Robert Seiple, and James Turner Johnson.