Nearly twenty years ago, President Jimmy Carter delivered the LeRoy H. Pfund Lecture on February 24, 1992. The following article “President Carter urges Christians to compassion and action on behalf of others” by Margaret Irish documented the event and was featured in the April/May 1992 issue of the Wheaton Alumni magazine.

As a young person, Jimmy Carter had two ambitions. The first he accomplished when he attended the U.S. Naval Academy, becoming an officer in the Navy.

The second was to teach at a college or university. 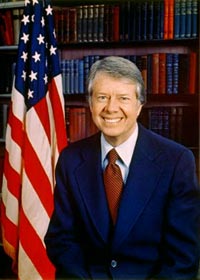 “Thanks to Ronald Reagan, I reached that ambition four years earlier than I’d anticipated,” Carter quipped, speaking to the packed house gathered in Edman Memorial Chapel for the LeRoy H. Pfund Lecture. His defeat in the 1980 election spelled the end of his presidency, but it gave him opportunities to serve that he would never have had if he had remained in office. And service, for Jimmy Carter, is more significant than his job title.

“The essence of Christianity, as described by Christ himself, is not preaching which is important hut is action on behalf of others,” Carter said. “Jesus reached out to the outcast, the despised, the people who were different. How do we translate that compassion into our own culture?” Carter emphasized that Christians must serve others and minister to their needs, rather than associating only with people like themselves.

He emphasized that much of the nation’s and the world’s suffering could be alleviated if its affluent citizens would more willingly share with those who had little or nothing. “The greatest discrimination today is that of rich people against poor people.”

The Carter Center at Emory University in Atlanta is one example of an institution whose purpose is to address the needs of the poor, the homeless, the illiterate, the sick, and the outcast both in the United States and abroad. Carter challenged his audience to find ways to make a difference in the lives of others, one at a time. He cited the Atlanta Project, which is coordinating efforts between private enterprise, businesses, churches and government agencies in the city of Atlanta to react to disadvantaged people. Individuals can make a difference, “adopting” those in need, getting to know them, taking them to the doctor, teaching them to read, or taking time to be available for a child at risk.

Carter also expressed his conviction that the United States, in its role as a superpower, should he addressing problems such as hunger, disease, war, and human rights abuses in the world, “Our country should he totally committed to peace, not war … we have a direct responsibility to use our influence, whatever it might he.” He mentioned the Carter Center’s work in these areas, monitoring world conflict, working to improve the health of children in the Third World, finding ways to alleviate hunger. He warned, “When we think we’ve got it made, and that we are particularly blessed because we deserve to be blessed, then we have abandoned a major part of the faith in Christ that we claim is a driving force in our lives.”

At a press conference preceding the lecture, President Carter responded to questions from both journalists and students. He said he is encouraged that the United States is urging new Middle East peace talks, but felt that final settlement at this time is unlikely. Carter considers the Democratic presidential candidates to be capable leaders who should not be characterized as political “lightweights.” He had no strong preference among them, he said, “but once we choose one, I will give him my support.” He also felt that the contenders are “fair game” for the press, which “has an obligation and a right to scrutinize their past actions and let the American people make a judgment.”

The key theme of this year’s Pfund Lecture became Carter’s message of action on behalf of others. Listeners heard it stressed repeatedly by a man intent on meeting the challenges of a needy world with hope, enthusiasm, and Christian commitment.

“Something can be done,” Carter said. “We can prove that hopelessness can be overcome. We can do it with justice, humility, service, compassion, love, and peace.”

———-
The Leroy H. Pfund Lectureship was established in 1987 by Mr. Fred Bostrom, Sr., in memory of his wife, Ragnhild; it was named for Coach Lee Pfund ’49, who served the College for more than 38 years, first as a coach and then as director of the alumni association. The lectureship brings to Wheaton College’s campus leaders of American political and public life to enhance the students’ awareness of public Policies, issues, and views, and offer them a broad range of perspectives. The 1992 Pfund Lecture brought former President Jimmy Carter to Wheaton.

The Wesley G. Pippert Papers in the Wheaton College Buswell Library Special Collections has a wealth of information about the former president. Wes Pippert came to Washington, D.C. in 1976 in order to cover Jimmy Carter’s presidential campaign as the principal UPI reporter. Pippert followed Carter to the White House and was assigned there from 1977 to 1981. He also wrote “The Spiritual Journey of Jimmy Carter: In His Own Words” (1978).