We know the names of the great. But there are those who, as influential as any statesman, author or inventor, step in and out of history. Amazingly, their identity remains totally unknown.

One such figure appears in the Bible, Daniel 3:16-28. King Nebuchadnezzar did not appreciate the fact that his captives, “certain Jews,” Shadrach, Meschach and Abednego, refused to worship the golden image he had provided, so he ordered the boys bound and thrown into a blazing furnace. Looking into the pit, the king saw another figure. “Lo, I see four men loose,” he told his confused counselors, “walking in the midst of the fire, and they have no hurt; and the form of the fourth is like the Son of God.” The king concluded that God had sent an angel to protect the three Jewish boys.

One day in the mountains of Tibet missionaries Bob Ekvall and Ed Carlson (both graduates of Wheaton College) were riding their horses. Fully aware that larger packs of marauders might overtake a smaller groups, both carried rifles and knew how to use them. Though Ekvall never killed a man, he stated that he had shot the horses out from under a few. 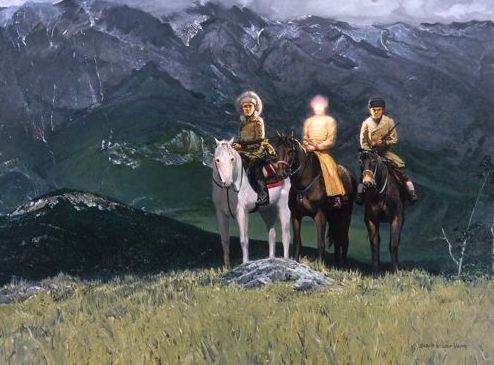 As Carlson and Ekvall rode up a remote pass, they saw in the distance several men on horseback galloping toward them, obviously plotting an assault. Suddenly the would-be bandits stopped and retreated. Later, Ekvall came across one of the men and asked why they had ridden away so hastily. “You outnumbered us,” he replied. “We weren’t afraid of you. We weren’t afraid of your friend. But who was that shining one with you?” Ekvall was understandably baffled.

Encountering apparitions was new to Ekvall and Carlson, but it is not so to the human experience. John Geiger, author of The Third Man Factor (2009) chronicles several such visitations. A few instances from the book illustrate:

Sir Ernest Shackleton, during his 1916 expedition to the South Pole, ordered his crew to abandon their ice-battered vessel, Endurance, and trek across breaking floes and frozen tundra, desperately searching for the shelter of a whaling station. Traversing mile after agonizing mile over glaciers and unnamed mountains, Shackleton and his starved, exhausted men at last reached their destination. Later, the explorer admitted that he and his companions, each without telling the other, had experienced the acute sense of a comforting, protective presence guiding them. In lectures he spoke of the event, but declined to elaborate. “None of us cares to speak about that,” he told an interviewer. “There are some things which can never be spoken of. Almost to hint about them comes perilously near to sacrilege. This experience was eminently one of those things.”

During his historic 1927 transatlantic flight from New York to Paris, Charles Lindbergh, piloting the Spirit of St. Louis, flew into explosive thunderstorms and blinding fog, drifting with each mile ever closer to sleep. To keep awake, he doused himself with cold rainwater. During the twenty-second hour of his voyage Lindbergh sensed other presences aboard the craft. These “phantoms,” he wrote, were there to assist, “conversing and advising on my flight, discussing problems of my navigation, reassuring me, giving me messages of importance unattainable in ordinary life.” The famed aviator did not discuss this until nearly three decades after the flight. He remembered “transparent forms in human outline,” but stated, “I can’t remember a single word they said.”

On 911 during the terrorist attack on the Twin Towers, at least one documented report told of an unknown rescuer suddenly appearing amid the chaos to lead desperate office workers to safety through thick smoke and falling debris.

Though necessary to survival, Geiger says, the Third Man is not “real” as a physical manifestation. He believes that each human brain carries an “angel switch,” a brain response activated by extreme and unusual circumstances. The Third Man may be explained neurologically, he suggests, but this does not answer “why” he appears. Ultimately, the Third Man is an instrument of hope.

The prophet Daniel, Robert Ekvall, Ernest Shackleton, Charles Lindbergh and many others throughout history would surely agree with Geiger that the Third Man is an instrument of hope, but would wholeheartedly disagree that he is not real. Something unreal cannot lead a dying man to safety, just as a starving man cannot eat unreal food that suddenly appears on his plate. Who or whatever the identity of the Third Man, he religiously keeps his appointments.

A painting depicting Ekvall’s encounter, “Who Was That Shining One?” by DeWitt Whistler Jayne, is displayed in the Special Collections reading room on the third floor of the Billy Graham Center.