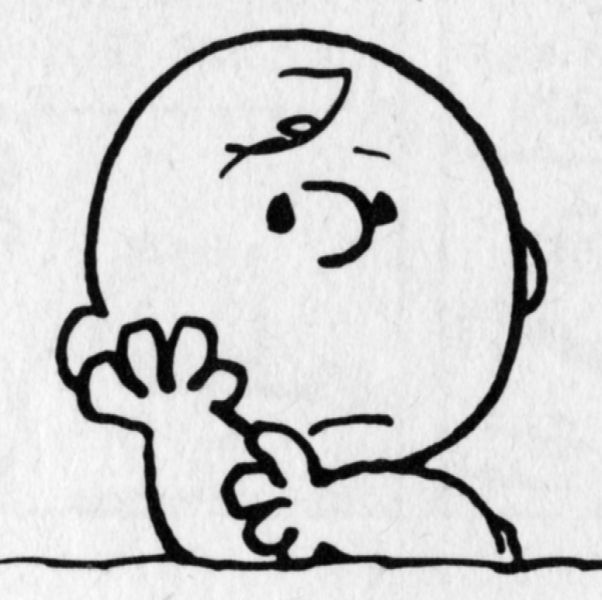 Charlie Brown, next to Mickey Mouse and Superman, is arguably the most iconic American comic strip character. Created by Charles Schulz, the Peanuts cartoon ran from October 2, 1950, to February 13, 2000. Amazingly, the final original strip appeared one day after the death of Schulz.

Charlie Brown, Patty, Pig Pen, Lucy, Linus, Snoopy, Schroeder and Beethoven were at the University of Minnesota last month, brought by their creator Charles Schulz. Schultz drew as he talked. “Lucy says you can draw Charlie Brown’s head by using a pie plate,” Schulz said as he drew something that looked very much like it could be drawn with  a pie plate, “but this is not necessarily so.” 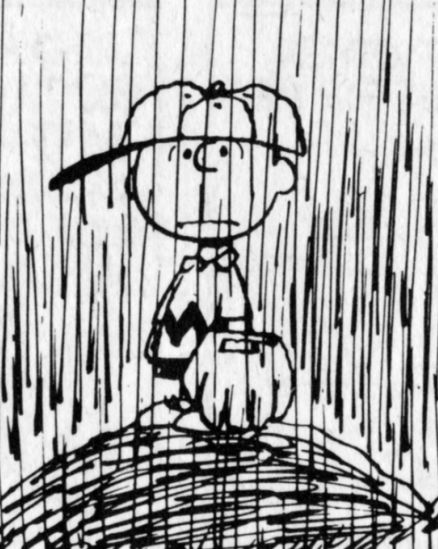 He put a little sad face on the circle, drew a much-too-small body under it and introduced Charlie Brown. Then he covered the drawing with vertical streaks. “That’s rain,” he explained. Charlie Brown says, “It always rains on the unloved.”

“The strip,” says Schulz, “depicts high-toned sayings jammed down these little people.” He does all the work himself. “After all, there’s not much there — figures and graphs.” He drew Snoopy the dog in a frantic moment trying to find his way out of a patch of grass, “caught in the throes of weed claustrophobia.” Schulz has a hard time thinking up ideas for Pig Pen. “They’re planning  Pig Pen doll, you know,” he told the Minnesotans. “When you set it down, a little cloud of dust rises.” He has trouble, too, with Schroeder, mainly because of the Beethoven bust on his piano. “I have a hard time drawing Beethoven. Sometimes he looks like James Mason and sometimes like Elsa Maxwell.”

Says the Tower, Schulz has some of the emotional problems as the Peanuts clan does. He is motivated by the belief that few people like cartoonists, and he “can’t stand” people who send in suggestions. His wonderment was matched on one occasion by that of little Linus. Clutching his “security blanket,” Linus listened intently to the story of Sambo and the tigers. When the story was over, Linus looked puzzled and asked the question one might expect any normal child to ask: “How in the world could anybody eat that many pancakes after undergoing such an emotional experience?”