The Evangelism and Missions Collection, located on the third floor of the Billy Graham Center, features an astounding array of books detailing the histories of international mission agencies, institutions, revivals and movements. In addition, the collection contains the biographies and autobiographies of missionaries, pastors, evangelists and other Christian workers, all dedicated to fulfilling the Great Commission. 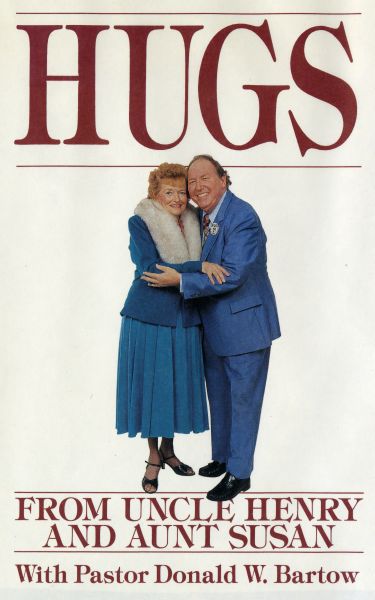 One of the unique ministries archived among the titles in the Evangelism and Mission Collection is chronicled in Hugs (1988) by Henry and Susan Harrison. Henry Harrison, D.D., served as co-host, (until replaced by Tammy Fay Bakker) and announcer for Jim Bakker’s PTL (“Praise the Lord”) Club, located at the Heritage, USA, campus, in Fort Mill, South Carolina.  In addition to evangelism, “Uncle Henry” and his wife, “Aunt Susan,” as they were widely known, specialized in hugging. This excerpt from an interview reveals their passion:

Interviewer: …To me, the most important feature is your license plate.

Interviewer: You had that specially made?

Uncle Henry: Yes, and I also designed one for Susan’s car. Her license plate is SUZ/HEN and when you pronounce it together it comes out “Susan.” But it’s for the two of us together, Susan and Henry.

Interview: That’s unique! Here’s a picture of the Upper Room at Heritage, USA. Are you there often?

Uncle Henry: Susan and I are there every weekday afternoon, Monday through Friday, for an hour of sharing and testimonies and hugging. And…I don’t think it is a sacrilege when I sometimes affectionately refer to it as “The Hugging Room.” I truly believe there is sweet communion in hugging on the part of believers.

Aunt Susan: When God said to Jim Bakker years ago, “Jim, if you’ll build me a place I’ll meet you there,” Jim took some of his people to Jerusalem and measured the Upper Room’s every inch and every column. The one at Heritage as as near a replica of that one as the local building code would permit. The Upper Room in Jerusalem has stone floors, but we do have a nice red carpet to kneel on. And we have the atmosphere — the spiritual atmosphere — that is so conducive to praise and worship and healing and salvation and all of the things people come there crying for in their spirits. They pray and intercede for their friends and family back home.

Hugs appeared one year before Jim Bakker’s devastating sexual scandal brought down the PTL empire. The Heritage property has since been portioned and sold to various developers. Quite poignantly, the Harrisons observe at the end of the book:

Aunt Susan: …I’d like to leave a parting thought on this. When a person is truly hurting to the very depths of their being — as in bereavement at the death of a precious loved one — the ear fails to register the meanings of the words being heard. 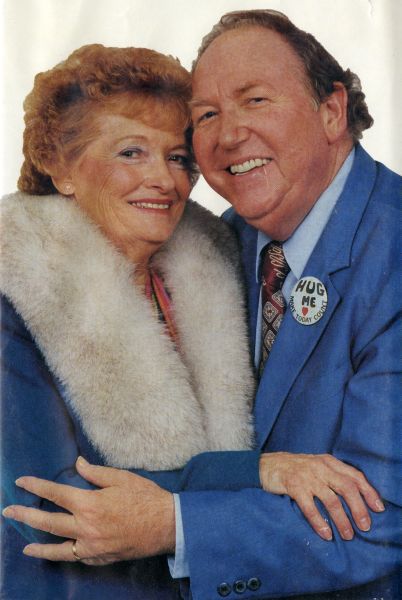 But the warmth and concern conveyed by a sincere, loving hug reaches and soothes the wounded spirit as nothing else can…Through this book our hugging people will continue long after we’re gone from this world.

Uncle Henry: I think of this book as being a kin to the Book of Acts in that it has no “amen,” but lives on in the lives of “hugging” believers! I don’t know who wrote these lines, but we’d like to leave them with you….Keep on huggin’!