It has been wisely suggested that each incoming Wheaton College student mandatorily read The Silver Trumpet (1930) by J. Wesley Ingles. The Silver Trumpet received the John C. Green Award from the American Sunday-School Union as its unanimous choice for a manuscript whose subject was “the heroic appeal of Christianity to young people.” It went through nearly two dozen printings through the 1950s, later republished under the title The Amazing D. Randall MacRae (Moody Press) and has made its way online as an “on-demand” book through Amazon. 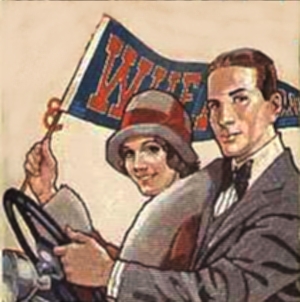 Dedicated to “President Charles A. Blanchard who, of all my teachers, has left the deepest and most abiding impress upon my life,” the novel follows the fortunes of D. Randall MacRae, wealthy worldling and hotshot football hero who, pursuing a pretty young lady, reluctantly transfers from magnificent, ivy-walled Princeton to backside-of-nowhere “Wharton College,” a repressive “fundamentalist” institution situated somewhere west of Chicago. MacRae painfully adjusts to campus life, fumbling about with less certitude than his athletic reputation might suggest. His anxieties are gradually lightened as the semester progresses and he at last secures sweet romance–along with a genuine, humbling faith in Christ. An airy, wholesome romp, Ingles’s tale conjures the gentler, courtlier moods of the pre-War Midwest, the imminent thrill of the Big Game against North Central, autumn’s chill and the coloring leaves against gray skies, blossoming friendships in depressed times and the promise of bright young lives wholly devoted to Christ. In a day when there was no other “safe” place to attend college, alum of a certain age point to an early reading of The Silver Trumpet as the deciding factor for choosing Wheaton College, a fact bolstered by Rudolph Nelson in his biography of Edward Carnell. He notes that “Dr. V. Raymond Edman…administered a questionnaire to freshmen one year during the forties. In response to a question concerning their reasons for having decided to attend Wheaton, more than half of the entering class included in their list a reading of The Silver Trumpet” (p. 28).